People at Camp Liberty are at very high risk, US Congress meeting told 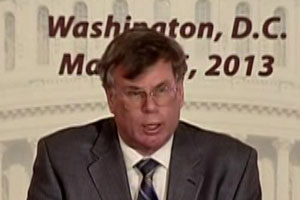 NCRI – The United States must keep its promise to protect the residents of Camp Liberty – who are at risk of further rocket attacks due to the actions of the UN’s Iraqi representative Martin Kobler, American Colonel Wesley Martin has told a meeting in US Congress.

Kobler’s ‘fried’ plan to move Iranian dissidents from Ashraf to Camp Liberty has meant more people have left the camp in body bags than in airplanes’, he told the meeting last week.

Rt. Col Martin – the former chief protection officer for the Coalition Forces in Iraq and commandant in charge of protection of Camp Ashraf – said vulnerable residents were now living in structures which had ‘less strength than a soup can’.

He told the meeting: “Due to the behavior Martin Kobler, the risk another attack is very high. This leaves the residents with one question. If the camp is too dangerous for UN and US State Department personnel to enter, then why should we be forced to stay here inside Camp Liberty?

“The overwhelming desire of the residents of Liberty is now to return to Ashraf. Despite all the hazards, Ashraf has proven itself to be reasonably safe from rocket attacks. Between 1986 and 2009 Ashraf endured 21 rocket attacks.

“During those 23 years only one resident died from those rocket attacks.”

The principal targets at Liberty were the residents themselves and the life support infrastructure like generators, black water tanks and other systems – and the potential enemies were the
Iraqi military, the Hezbollah-controlled Quds force, Colonel Martin said.

He added: “The trailers in Camp Liberty were built in Kuwait and Jordan. These structures have less strength than a soup can.

“As already proven, the rockets will penetrate the structures and shrapnel will tear them apart.”

Iraqi Colonel Sadiq had also removed 17,500 T-walls, which he branded ‘premeditation’ for another attack.

He said: “Sadiq’s latest action of removing the T walls installed by the Americans will ensure future rockets attacks achieve deaths and injuries from shrapnel, but also from residents being tossed around during the explosions.

“Sadiq’s refusing to allow the residents to have sandbags further increases their risk. Cement barriers do not absorb the energy of blasts, only deflects.

“The T walls, sandbags, everything, the helmets, need to be brought into Ashraf and that camp needs to be probably secured.

“Chemicals need to be put on the ground where all that raw sewage has been allowed to spill out and unfortunately Sadiq has made it impossible for the residents to live under those conditions.

“The United States needs to make good on all broken promises to the residents, starting with honouring the protected persons status under the 4th Geneva Convention.

Previous articleMaryam Rajavi: The New Year will be the year of overthrow of Iranian regime
Next articleIran: A student newsletter banned