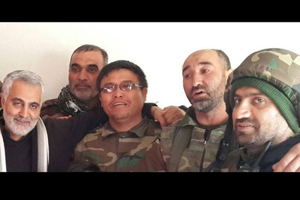 Four commanders of Iran’s Revolutionary Guards have been killed by fighters of the Free Syrian Army, which is waging civil war against the regime of dictator Bashar al-Assad.

They were all member of the IRGC’s Qods Force, which Iran has sent to fight alongside Assad forces in Syria.

The photo from left to right shows: Qassem Suleimani, Commander of Quds Force; Commander Hossein Badpa from 41st IRGC Division (Sarallah of Kerman) killed on April 20 near Basir al-Harir in Dera’a; Alireza Tavas’solei, an Afghan living in Iran who was killed in Dera’a on February 28; Abbas Abdollahi, commander of the Saberin Battalion of the 31st IRGC Division (Ashura) who was also killed on the same day;  Ali Soltan Moradi, a member of Basij that was killed on February 12, 2015 in Dera’a, southern Syria.

In late April, the Iranian regime’s media reported on the burial ceremonies in Iran of another four commanders and dozens of IRGC forces together with dozens of Afghans and five Pakistanis.

After the uprising of the Syrian people, Iran formed groups called Fatemioun and Zainabiyoun on the pretext of defending the holy shrines in Syria, but they are known to have been extremist groups in Afghanistan, Pakistan, Iraq and Hezbollah who had been organized by the Iranian regime to massacre the Syrian people.

The Afghans are mostly Shiite Muslims from the Hazara ethnic group who were living as illegal immigrants in Iran until they were rounded up by the regime’s Revolutionary Guard.

They were given the choice of either fighting in Syria or going to jail, according to German magazine Der Spiegel.

The magazine has estimated that at least 700 Afghans have now been killed in fighting around Aleppo and Damascus alone.

This reliance upon Afghan fighters is part of Iran’s strategy of support for the Assad regime, which is coming under increasing pressure from opposition fighters.

It also advances Iran’s larger strategy in the Middle East, according to researcher Philip Smyth, who noted in a report how Tehran is coordinating a ‘Shi’ite jihad’ in Syria, using its militant proxies in Iraq and Lebanon to portray the defense of the Assad regime as a religious obligation.