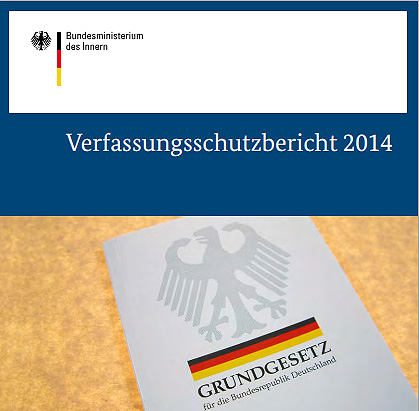 NCRI – The People’s Mojahedin Organization of Iran, PMOI (Mujahedin-e Khalq, MEK), and the National Council of Resistance of Iran (NCRI) are the primary targets of spying activity by the Iranian regime’s notorious Ministry of Intelligence and Security (MOIS), Germany’s domestic intelligence service, the Office for the Protection of the Constitution (Bundesamt für Verfassungsschutz, or ‘BfV’), said in a new annual report.

Spying on the Iranian opposition is the most important task pursued by the Iranian regime’s intelligence apparatus, the BfV wrote in its 260-page annual report dated July 2015.

The report covers some of the activities of the Iranian regime’s Ministry of Intelligence and its embassy in Germany through the course of 2014.

“Spying and fighting against opposition movements in Iran and abroad remains one of the most important points of concentration of the Iranian regime’s intelligence apparatus. Therefore, these intelligence systems are gaining political, economic and scientific information in Western countries.”

“Iran’s Ministry of Intelligence (MOIS) remains the most important element behind the activities against Germany. Its focus is especially on the People’s Mojahedin Organization of Iran and National Council of Resistance of Iran. Alongside these intelligence and reconnaissance measures against German systems and equipment inside and abroad, first and foremost the interests of Germany’s long-term objectives lie in the fields of foreign policy and security.”

This report continues in a section entitled, “Methods”:

“At first controlling intelligence activities to obtain information is carried out by the main base of the Ministry of Intelligence and Security in Tehran. To reach this goal, the MOIS especially uses family and/or work visits to Iran by individuals who are on this ministry’s list of targets. The reason is that in Tehran it is less possible for them to get loose of the MOIS, and this is a perfect preset for intelligence system conditions and activities.”

“Simultaneously, the main and legal center of Iran’s MOIS in Berlin carries out very important activities and tasks focusing on intelligence gathering. This includes supporting and pursuing intelligence operations ordered by the MOIS base; (these operations) are mainly against targets in Germany, but in various cases they are against individuals or facilities in European countries. Colleagues in Iran’s consulates in Germany have a duty to support the MOIS central and legal base.”

“Iran’s intelligence apparatuses are the main tools used by senior (regime) officials to guarantee their hegemony; under such conditions the Iranian opposition remains under the watch of the MOIS.”

“Iran considers itself a religious power with a specific structure and objective outside its borders, seasoning it by pursuing an anti-West and anti-Zionist dogma.”

“Simultaneously clear signs are seen depicting a dramatic crumbling of this regime’s economic conditions due to international sanctions over its nuclear program.”

“In such circumstances, considering the regime’s interests inside Iran, its necessity to obtain information about the West’s future policies, for example on Germany’s foreign policy and security, and obtaining information on illegal transfers – to bypass sanctions if possible – will significantly increase.”

With removal of PMOI and NCRI from all Federal and State lists in Germany, clerical regime’s major investments…

Over the past several months, the Iranian opposition has hosted several online conferences, with participation from political dignitaries in the US, Britain, the European...
Read more
News: Iran Resistance

On November 27, the trial will begin in a Belgian court for the Iranian regime’s terrorist- diplomat Assadollah Assadi. The former third counselor of...
Read more
Search