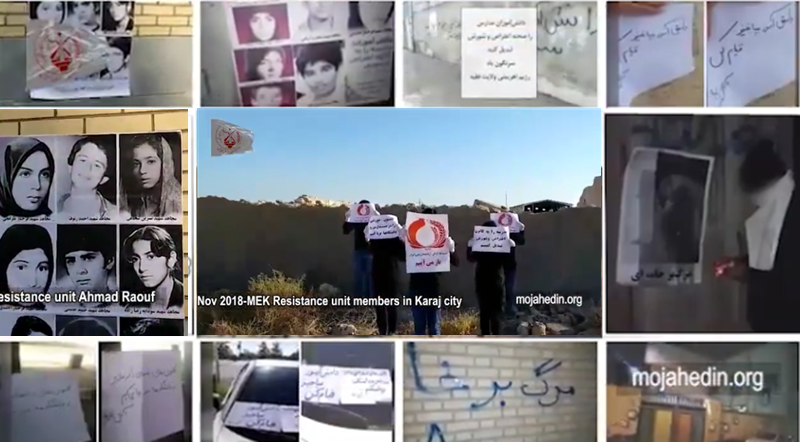 As protests continue across Iran, members of the resistance units of the People’s Mojahedin Organization of Iran (PMOI/MEK) escalated their activities on Monday by setting fire to the entrance of a Revolutionary Guards (IRGC) Basij base in Kermanshah, which is home to a number of the regime’s repressive units.

Also on Monday, brave MEK members in Qaemshahr set fire to posters of Iranian regime Supreme Leader Ali Khamenei and in Karaj, they raised the flag of the National Liberation Army and chanted “Death to Khamenei, Hail to [Iranian Resistance leader Maryam] Rajavi”, while in Gachsaran, they graffitied “Death to Khamenei” in public places.

In Tehran and Shiraz, resistance unit members put up posters of MEK martyrs who were murdered by the Iranian regime, while MEK members in Mashhad, Isfahan, and Amol put up graffiti and posters calling on all students to turn their schools into anti-regime protest centres.

Nationwide: Truck drivers continued their strike for the third consecutive day in 35 cities in 18 provinces across Iran, including Isfahan, Najafabad, Sabzevar, Mashhad, Ardabil, Qazvin, Mobarakeh, Yazd, Zarrin Shahr, Rumeshgan, Kermanshah, Shahr-e Kord, Sirjan, and Sabzevar. They are demanding better working conditions, fair pay, and the release of their imprisoned colleagues arrested during the previous strikes. Their strike continues despite pressure from the Regime’s authorities, which includes threats of arrest, being fired, and even execution.

Tehran: Open University students from the medical sciences department held two rallies – one outside the school’s main building and one outside Parliament – over their current unfair conditions.

Behbahan: Young people protested at Friday prayers over not being hired at the local refinery in favour of non-locals who would work for less.

Varzaneh, Shatur and Ziar: Farmers gathered to protest to the scarcity of water and lack of access to water resources. The Regime has been diverting water away from the farms and the people of Isfahan towards factories run by the Revolutionary Guards. This has exacerbated the impact of the record drought that Iran is facing and has been the spark for many other protests by farmers and ordinary Iranians over the past few months.