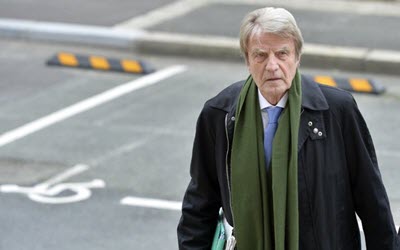 NCRI – The 1988 massacre of political prisoners in Iran by the mullahs’ regime is a ‘crime against humanity’ which ought to be prosecuted at the international courts, former French Foreign Minister Bernard Kouchner has told POLITICO. The following is the text of an article published on Wednesday by POLITICO about the 1988 massacre:

PARIS — Former French Foreign Minister Bernard Kouchner and a top human rights lawyer called for an international probe into a 1988 killing of thousands of political prisoners in Iran, as new allegations linked members of the country’s current government to the spree of executions.

Kouchner, who was the French foreign minister from 2007 to 2010 under the presidency of Nicolas Sarkozy, told POLITICO Iran’s killing of political prisoners at the end of the Iran-Iraq war was likely a crime against humanity that needed to be investigated and prosecuted by the International Criminal Court in The Hague.

“It’s a crime against humanity and must be taken into account by the International Criminal Court,” said Kouchner. “The entire international community has a responsibility to shed light on these events and ensure that the criminals behind them face an investigation.”

Kouchner’s comments came a month after a recording surfaced that revealed disagreements between top Iranian officials during the killings, which occurred in the summer of 1988.

Ayatollah Ruhollah Khomeini had issued a fatwa ordering the execution of all “hypocrites,” or political prisoners, locked up in Iranian jails. Most of them were members of an opposition group named Mujahedin-e Khalq (MEK), whose forces had defected to Saddam Hussein’s Iraq during the war, only to lose a decisive battle and face a crackdown at home.

Ad hoc tribunals condemned thousands of prisoners to death over the course of a few months. Amnesty International estimates that around 4,500 people were killed during the wave of hanging executions, which were carried out across the country.

But opposition groups and the controversial MEK organization, which remains active abroad, assert that the death toll was closer to 30,000, with victims including teenagers as young as 14 and pregnant women.

“This is a crime against humanity of great magnitude,” said William Bourdon, a French lawyer for Transparency International who has handled human rights cases, notably representing Franco-Chilean families in a case against General Augusto Pinochet. “The International Criminal Court has prosecuted crimes that were of smaller magnitude, but there is no doubt this would fit their definition.”

On the recording, Hossein Ali Montazeri, a senior official who was once pegged to become Khomeini’s successor, can be heard telling an audience made up of a sharia judge and prosecutors that they were conducting “the biggest crime in the Islamic Republic, for which history will condemn us.” A member of the audience asked if he could carry out a final set of 200 executions, to which Montazeri responds that he would not authorize a single one.

Montazeri was subsequently placed under house arrest for the rest of his life. He died in 2009. His son, who lives in Iran, published the recording on August 9.

At a news conference this week, MEK officials presented allegations that members of the “death councils” that questioned prisoners and carried out sentences were now among the top members of President Hassan Rouhani’s administration.

Mostafa Pour-Mohammadi, who at the time was a member of the Ministry of Intelligence and Security, is currently Iran’s justice minister. Hossein-Ali Nayyeri, then a Sharia judge, is now head of the Supreme Disciplinary Court for Judges.

“We call on the international community to shed light on these events, though we do not underestimate the obstacles,” said Bourdon. “There are tools that can help us end this insolent impunity.”

Launching an international investigation into the killings would require the involvement of one or more governments to raise the issue at the United Nations, said Bourdin.

But given a recent spate of preliminary business deals struck between Iran and Western countries following a thaw in diplomatic relations, governments were reluctant to jeopardize economic interests by pushing for a probe.

“There is nothing impossible about making an ad hoc tribunal to address this case,” Bourdin said. “The question needs to be taken up by governments.”