Press Release- 28 August 2012 -The US, UN, and EU Should Strongly Condemn Attack on Ashraf Residents & US Observers Should Be Present In All Phases of Transfer 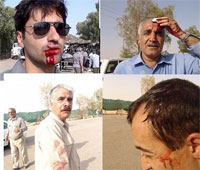 DELEGATION FOR RELATIONS WITH IRAQ PRESIDENT

Yesterday’s attack on Camp Ashraf residents by Iraqi forces causing injury to 20 residents, once again reveals the ominous intentions of the Iranian regime and its collaborators in Iraq. According to pictures and video clips, Iraqi SWAT forces (wearing all-black uniforms) attacked the defenceless residents, who had gathered with their personal belongings to be inspected before moving to Camp Liberty at the specific request of the US and UN.

The Iraqi thugs attacked the residents with sticks, clubs, and rocks. The residents’ only apparent offence was to object to the theft of their belongings by the Iraqi forces during their tedious inspections.
Yesterday’s attack is not an isolated incident. The systematic theft of belongings of the Ashraf residents, the prevention of transfer of necessary items such as power generators, water heaters, warmers, and computers to Camp Liberty, the failure to provide minimum humanitarian requirements at Camp Liberty, and the continuation of a 4-year siege, are all part of the same scenario of breaking and destroying an organised and legitimate opposition movement to the Iranian regime; the opposition that the Iranian mullahs are most afraid of in the face of internal and international crises.
Such oppressive actions are expected from the government of Iraq. What is intolerable and is in violation of internationally known standards, is silence and inaction from the side of the United States and United Nations in response to such behaviour. Remarks by a State Department spokesperson only three hours after the attack, praising the government of Iraq with regards to Ashraf matters are unfitting. During the briefing, Mrs Nuland, in replying to a question by a reporter who asked why the residents don’t have permission to take their own generators to Liberty, not only refrained from answering the question, but said, “we commend the fact that the Iraqis are working well to help move these individuals.” Similar remarks that have been repeated during recent weeks will only embolden the government of Iraq in violating the rights of the residents of Ashraf and Liberty.
Yesterday’s unfortunate incident sounds the alarm, so I will re-emphasize on the following points:
1. The US, EU, UN, UNAMI and UNHCR should strongly condemn yesterday’s attack by Iraqi forces. Only a strong condemnation can ensure that the Iraqis will hesitate to repeat such incidents in the future.
2. The US, having disarmed the residents of Ashraf and signed a contract with each individual resident guaranteeing their protection, must now ensure that observers from the US embassy should to be present constantly at all stages of transfers between Ashraf to Liberty and from Liberty to third countries.
3. I have previously stated the urgency of removing the PMOI/NCRI from the US terror list. Following the courageous decision by Mrs Rajavi to instruct the movement of the 6th convoy from Ashraf to Liberty, there is no further excuse for a delay in this process by the US State Department. If this had been done, yesterday’s crime would not have taken place. I respectfully ask Secretary of State Clinton to end a 15 year injustice to the people of Iran and the opposition to the Iranian theocratic fascists, who pay the price of the US blacklisting by enduring siege, oppression, torture and executions on a daily basis.
STRUAN STEVENSON, MEP
President of the European Parliament’s Delegation for Relations with Iraq