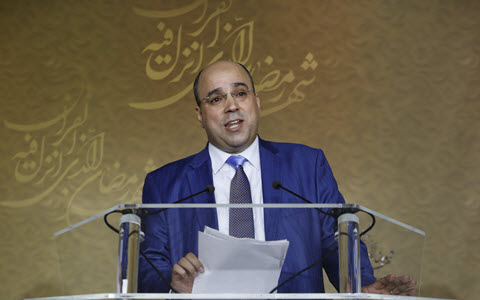 NCRI – On Saturday, June 3, a gathering was held in Paris to mark the holy month of Ramadan, with Iranian opposition leader Maryam Rajavi and a large number of political and religious dignitaries taking part from various Islamic countries and institutions.

The participants all condemned Iran’s meddling in regional neighbors, its fundamentalist and terrorism under the banner of Islam, and describing these measures, especially those by of the Revolutionary Guards and Iranian regime in killing the Syrian people as the main element behind the Middle East’s crises.

Algerian writer Anwar Malek, former head of the Arab Society in Syria, in his speech said Islam is a tolerant religion, a religion of co-existence, a religion of peace, kindness, not terrorism, not fundamentalism, sectarianism and racism.

Our message as Muslims is that we must keep the flag of peace aloft, he added.

And the fact that the NCRI, and all the people who have gathered here with different mentalities, we all agree that the Middle East and world has no other choice but the toppling of the Iranian regime, Malek continued.

Nations have now torn down the walls of fear, believing they have no solution or choice but freedom. We tell the Iranian people we are with you, from Arabs, Fars, Kurds, Turks and all the nationalities, we are with you and we understand what you have been through under nearly 40 years of the mullahs’ despotic rule and religious fascism, he added. These are the messages that we believe in and standing to it, until the day Tehran will be free and we will meet in person, Malek finalized.