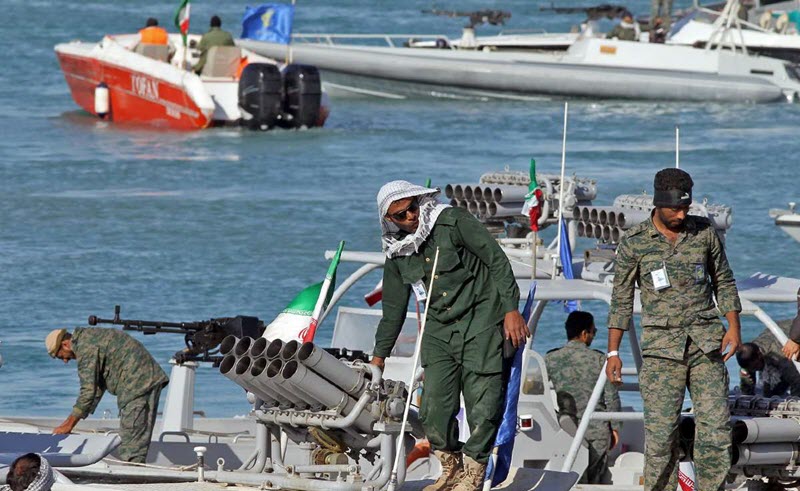 On Tuesday, Express News reported that the British destroyer HMS Dragon had recently been obstructed by fast attack vessels belonging to the Iranian Revolutionary Guard Corps while it was transiting the Persian Gulf. Tehran and the IRGC have frequently pointed to these sorts of boats as the main tools in “swarm tactics” that would supposedly be employed by the Islamic Republic to defeat larger and better equipped Western navies.

The IRGC’s use of those vessels to harass or block the path of passing warships has been a recurring problem in recent years. Although dozens of these close encounters were reported by the US Navy between 2015 and 2017, they reportedly tapered off until the last such incident was recorded in August of last year. However, just last month, Iranian state media aired footage of a new close encounter involving the USS Theodore Roosevelt, accompanied by the claim that the IRGC vessels had successfully warned off the American warship.

During some of the previous encounters, the Iranian boats refused to break off from fast approaches to the American vessels, even in the wake of audio-visual warnings and attempts at radio contact. In at least one case, this ultimately prompted the Americans to fire warning shots into the water.

In the recent incident involving the HMS Dragon, the IRGC boats eventually moved out of the way in response to five blasts from the ship’s horn, but a spokesperson for the Royal Navy indicated that flares and warning shots would have soon followed. He was quoted by British media as saying, “You have to provide a robust response… The day you don’t take it seriously is the day you become unstuck.”

The Express article also cited Iran’s recurring threats to blockade the Persian Gulf, through which approximately one-third of the world’s oil is transported. On this basis and on the basis of escalating tensions between Iran and the West, as well as between Iran and its Arab neighbors, some experts are reportedly predicting that the regional volatility will touch upon Western merchants and naval forces in the form of more incidents like the above-mentioned.

At the same time, such incidents will no doubt help to justify the continued escalation of pressure on Tehran by the US, Saudi Arabia, and others. The IRGC’s latest efforts to intimidate foreign navies came at roughly the same time that Saudi Arabia and Bahrain announced the addition of the entire IRGC as well as a number of its officers to their lists of terrorists and terrorist-sponsoring individuals and organizations.

This is not the first such measure undertaken by Saudi Arabia and its allies, and with the US urging additional multilateral pressure on the Islamic Republic, it is unlikely to be the last. In 2016, the Gulf Cooperation Council collectively added Iran’s Lebanese proxy, Hezbollah to its list of terrorist organizations. And in May of this year, the GCC member states specifically named 10 Hezbollah leaders and made them subject to new economic sanctions.

This week, US Treasury Secretary Steven Mnuchin visited Saudi Arabia as part of a larger tour of the Middle East. The agenda for the visit evidently included efforts to build upon the existing anti-Iran alliance that is centered around traditional US allies in the region, as well as discussing the prospects for the Gulf Arab states to shore up global oil supplies and otherwise aid in the enforcement of US sanctions on the Islamic Republic, which are scheduled to come back into full force in November, following US President Donald Trump’s announcement in May of his country’s withdrawal from the 2015 Iran nuclear deal.

The US Treasury has previously provided Saudi Arabia and its regional partners with part of their rationale for taking action against Iranian institutions and proxies. In reporting upon the Saudis’ terror designation for the IRGC, Reuters noted that it was the Americans who concluded that three officers in the IRGC Quds Force, including its commander Qassem Suleimani, were responsible for the attempted assassination of former Saudi Ambassador to the US Adel al-Jubeir in 2011.

The Reuters report also credits the Trump administration with efforts “to create a security and political alliance with the Sunni Gulf Arab states to counter Shi’ite Iran’s influence in the region, especially in Syria and Iraq.” Meanwhile, Agence France Presse highlighted one aspect of that effort on Tuesday when it pointed out that the Riyadh-based Terrorist Financing Targeting Center had joined with the US Treasury in imposing sanctions on Afghanistan’s Taliban, which has lately been exhibiting ever closer ties with the Islamic Republic.

The TFTC was created in May 2017 as a joint venture of the US, Saudi Arabia, Bahrain, Kuwait, Oman, Qatar, and the United Arab Emirates. Its emerging efforts to contain the Taliban include measures targeting two IRGC officers who have reportedly provided the Afghan Islamist organization with training, financing, and logistical support. For opponents of Iran’s clerical regime, this is emblematic of Tehran’s effort to establish regional hegemony through coordination with a wide variety of anti-Western actors, regardless of sectarian differences between them and the leadership of the Islamic Republic.

During his visit to Riyadh, Steven Mnuchin said that “Iran’s provision of military training, financing, and weapons to the Taliban is yet another example of Tehran’s blatant regional meddling and support for terrorism.” He added that neither the US nor its partners would tolerate such behavior.

In keeping with such promises, the US is naturally taking its own measures to impede the influence of Iran and its proxies, even apart from the re-imposition of sanctions that were suspended under the nuclear deal. On Monday, Voice of America News reported that the US Senate had passed legislation, pending the president’s signature, that imposes new sanctions on Hezbollah and its financial supporters.

Additionally, the Department of Justice has designated Hezbollah, along with four other groups, as “top transnational organized crime threats” at a time when US attorneys are in the midst of the first ever prosecution of alleged Hezbollah operatives on American soil. VOA News accordingly quoted Phillip Smyth of the Washington Institute for Near East Policy as saying, “The Trump administration has taken a number of concrete moves against the financial assets of Hezbollah, other Iranian regional proxies (particularly in Iraq and Bahrain), and IRGC assets.”

The article also quotes other experts to give the impression that the concrete measures are tentatively expected to have concrete effects, which will build upon the effects that Iran sanctions may already have on the country’s ability to finance and promote its main foreign proxy. While none of these sanctions are expected to conclusively cripple the terrorist organization, they may limit its ability to operate beyond its borders – an important change at a time when Iran has utilized Hezbollah fighters as a major weapon against Syrian rebels during its eight years of support for the dictator Bashar al-Assad.

VOA News also points out that the apparent goal of the anti-Hezbollah measures is to impede the organization without having a serious impact on the Lebanese economy as a whole. This reflects the situation in Iran, where supporters of the forthcoming sanctions emphasize the clerical regime’s tendency to consolidate wealth into the hands of hardline institutions and then waste it on foreign interventions and support for Hezbollah and numerous other proxies. This in turn underscores the amplifying effect that the Iran sanctions would have upon other measures specifically targeting those proxies.

While there have been some doubts in the past about the extent of the sanctions’ effectiveness in the face of international defiance, those doubts are shrinking as more and more countries come on board to either support the American crackdown on terrorism or else avoid the risk of severe financial penalties. On Tuesday, a particularly significant development came in the form of a major Chinese bank’s announcement that it would no longer be conducting transactions with the Islamic Republic, regardless of the ongoing trade war between the US and China.

The Hill described that bank, Kunlun, as “the largest conduit for money flows between China and Iran,” and it specified that the processing of relevant payments was scheduled to stop a few days before the American secondary sanctions are set to be imposed in November. One might reasonably conclude that such cautious measures are being adopted in response to the Trump administration’s clear signals that it is serious about enforcement and the maintenance of maximal pressure on the Islamic Republic.

A separate report by The Hill indicated that one of these signals came in the form of the administration’s approach to waivers for countries that are supposedly reliant on imports of Iranian oil. Although the White House has grown more open to the notion of providing these waivers under some circumstances, it will reportedly be holding partner countries to a higher standard than the 20 percent reduction in imports that the Obama administration had set in 2013 as a condition for avoiding penalties.

The higher standards are supported by the Trump administration’s apparent confidence regarding the ability of global markets to adjust to the loss of Iranian oil. The Hill quoted the Treasury Secretary as saying he believes recent changes in oil prices already reflect the emerging situation, and CNBC seemed to agree with this sentiment, reporting that Saudi Energy Minister Khalid al-Falih is widely regarded as credible when he says that OPEC will be able to make up for the loss of Iranian exports.

Nevertheless, FX Street reports that Iran’s Oil Ministry continues to claim that its oil exports “cannot be stopped.” But as Oil Voice pointed out on Tuesday, these exports had already fallen from 2.7 million barrels per day in June to 1.9 million in September, even before certain companies and countries like India announced their intention to comply with US sanctions.