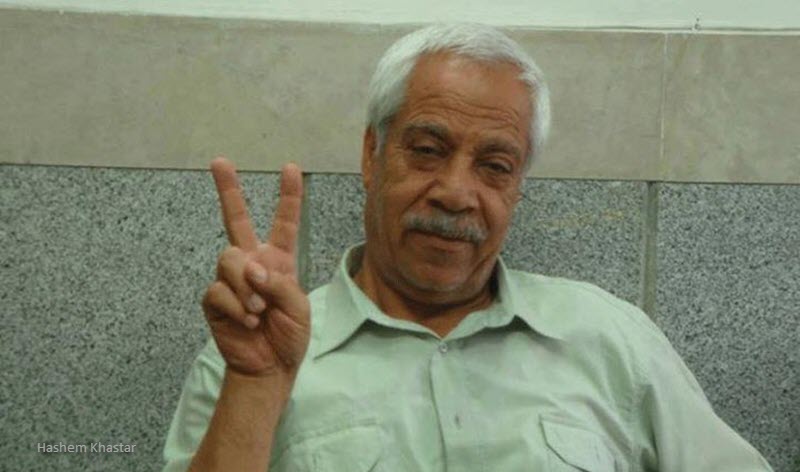 Renowned Iranian teachers’ rights and political activist Hashem Khastar, who was recently released from prison, has issued a message to the Iranian people stating that from his personal experience, the Iranian regime’s impermissible red line is for anyone to associate themselves with the main opposition group People’s Mojahedin Organization of Iran (PMOI), also known as the Mujahedin-e Khalq (MEK).

Khastar pointed out that Iranian security forces recently asked him to put out a statement denouncing the MEK, which he refused. Iranian intelligence ministry agents also informed Khastar that they are in contact with the son of the former Shah of Iran, and even offered to put Khastar in touch with Crown Prince Reza Pahlavi, which he also refused.

Khastar said that the regime is trying to encourage dissidents to join the camp of the monarchists and simultaneously attack the MEK. He said that in some cases the regime temporarily jails individuals to increase their credibility as opponents of the regime so as to better advance their mission against genuine regime opponents once they are released.

Excerpts from Khastar’s article on his Telegram messenger:

In a struggle against a tyrannical and dictatorial rule, the genuine opposition forces refrain from fighting one another and even conceal their differences and criticize each other in secret so as not to be noted by the common enemy. The dissidents within a country differentiate the main enemy from the secondary one to avoid fighting within themselves as this would benefit the ruling tyrant. When China was occupied by Japanese forces, the nationalist movement led by Chiang Kai-shek and the communists led by Mao united to defeat Japan as the main enemy of the Chinese people. They only fought against each other afterwards that led to the victory of Mao. During World War II, the two opposing camps, the socialists led by the Soviet Union and the capitalists led by the United States joined forces against fascists led by Hitler of Germany. They later fought against each other that lasted nearly 50 years until 1992 in what is widely known as the Cold War.

During the 40 years of the clerical rule, the Islamic Republic destroyed all political parties and organizations by various means and deprived them of any breathing space. It described the National Front as apostates and Freedom Movement, Iranian People’s Party, JAMA Movement and others similar tendencies as liberals (opposed to revolutionary that was despised at the beginning of the revolution), the People’s Fada’i Guerrilla Organization and its camp as atheists, and the People’s Mojahedin Organization of Iran (MEK/PMOI) as hypocrites (monafeqin) which Khomeini said was even worse than the atheists. However, the MEK could not be destroyed by being labelled as hypocrites and on the contrary it grew stronger by the day. Dr. Mehdi Khazali, who defected from the fundamentalist camp within the regime, revealed later that at the beginning of the revolution, it was decided by the ruling Islamic Republic Party to force the MEK into an armed struggle in a bid to justify its crackdown. To achieve this objective the group’s members were harassed, intimidated and killed.

To have a better understanding of the process the following two stories are enlightening.

On November 10, 2018, when the security forces had to give in to pressures by the heroic people of Iran and release me from Sina psychiatric hospital, two security agents approached and told me to issue a statement against the MEK because the group has supported me. They emphasized that the red line for them is not the supreme leader but the MEK. …

In April last year, when the intelligence agents raided my garden, they asked me why I do not work with the Crown Prince Reza Pahlavi? Would you like us to call his mobile for you to talk to him? I said no. …

The heroic people of Iran,

There is a sea of blood between the regime and the MEK. Everybody knows that the biggest enemy of the regime is the MEK because they enjoy a very strong organizational establishment and as admitted by the rulers of the regime, they are involved in all protests. On the contrary, the forces affiliated to the monarchists are very much scattered and unorganized.

Therefore, the regime is trying to encourage dissidents to move towards the monarchists’ camp and at the same time infiltrate within their ranks to show support for the Crown Prince and attack the regime and simultaneously attack the MEK. In other words, to set out the main enemy as being the MEK rather than the Islamic Republic. In order to make these individuals appear as being credible opponents of the regime, some of them may even be jailed for a while so that they can hold a better standing among them and be able to advance their mission more effectively. Other individuals, unaware of their intentions, may fall unwittingly in line with the intelligence agents and consider the MEK as the enemy rather than the regime. (As it happened in Syria when the government bombarded the Syrian Free Army (SFA) to force them retreat and pave the way for ISIS to advance, which is the enemy of the SFA).

The reason for this article is not to render support or reject a specific establishment, but to express the facts so that everybody would know to which camp he/she had been affiliated to and whether he/she is a true democrat or a shortsighted one. This would also help the dissidents to be effective during the transition to democracy and after the transition.

We are all aware that after the 1979 revolution, the Iranian ethnic minorities such as Kurds, Arabs, Turkmans, Baluchis and others organized movements to claim their just rights but they were all bitterly crushed by the Islamic Republic. Their demands have not been diminished but have become even more widespread, and they must gain their rights within the borders of Iran after the Islamic Republic in a free and democratic Iran of the future. In this course, there may be some tensions after the downfall of the Islamic Republic, but the true democrats will be able to resolve the issue and the shortsighted democrats will have no role to play. The shortsighted democrats always talk about opposition in order to fabricate false opposition groups whose lead would be in the hands of the security forces.

The heroic people of Iran,

In the free and democratic Iran of the future, the judiciary will be entirely independent and impartial where its decisions will be respected by all free and democratic countries in Europe and the US and we will respect their decisions. Therefore, violation of human rights of any kind under future governance, which I do not believe will happen, but to be prepared for any possibility, will be dealt with by courts in Iran and other free countries to ensure the rights of our compatriots. It will be only the task of the future National Assembly to determine which political parties, organizations and groups are allowed to operate.