The Following text is the response of the foreign affairs committee of the National Council of Resistance of Iran to an article published by the Evening Standard on December 7, 2017.

This response was submitted to the newspaper on December 8, but regrettably, despite repeated follow-ups by this Commission. Evening Standard has refused to publish it:

Letter to Editor
Joy Lo Dico
London Evening Standard
2 Derry Street
London W8 5TT
Dear Ms. Lo Dico,
I am writing to respond to a story posted in the Londoner’s Diary on the Evening Standard yesterday 7 December, quoting Denis MacShane, a deputy of former British foreign secretary Jack Straw and the unfounded and distorted allegations he has made against the main Iranian opposition movement PMOI.

MacShane’s involvement with this matter is not surprising considering he was expelled from the British Parliament for financial crimes and the “gravest case of wrongdoing.” He was as active as Jack Straw in supporting the Iran regime and its vitriol against the Iranian Resistance.

The European Parliament was the venue of an event hosting Mrs. Maryam Rajavi, President-elect of the Iranian Resistance, on Wednesday, December 6, 2017. The conference was convened at the invitation of MEP and Belgian Minister of State Mr. Gérard Deprez, who welcomed Mrs. Rajavi to the European Parliament along with two Vice-Presidents and dozens of MEPs. The final statement of this conference, which, will not please the fascist mullahs ruling Iran, could be read here.

Iran’s Ministry of Intelligence and Security (MOIS) is known to have hired a group of well-known agents, who go by the pretentious name of “Separated members of the PMOI.” This group was deployed to the vicinity of the European Parliament on Wednesday. The group of MOIS agents proclaimed in a statement on the same day that their goal was to “destroy Rajavi’s dreaded and terrorist organisation,” which clearly shows a terrorist intention.

In a litany of lies that tried to dramatise the negative reaction to the group’s incitement, it claimed that “the splinter group…were physically assaulted and attacked by a herd of Rajavi thugs” in a “supra-terrorist operation.”

Former Jack Straw confidant and expenses fiddler, Denis MacShane, attempted a rescue with a tweet: “Outside European Parliament thugs from People’s Mujahedin of Iran violently attacking elderly man, hitting with sticks, kicks etc,” … “I told them to stop it, so they started attacking me with sticks, fists etc.”
How MacShane has managed to ride into the scene like a knight to save the “victim” remains unknown, and is perhaps one of the mullahs’ regime miracles.

The truth is that the Iranian regime has recently concluded that it should resume assassinations and terrorist activities targeting its opposition on foreign and European soil. Based on Khamenei’s order (Iranian regime’s Supreme Leader), the regime recently assassinated Saeed Karimian, director of the Jam TV network in Istanbul, in April 2017. The MOIS had actively tried to tie Karimian to the Iranian Resistance by publishing doctored photos and videos in the run-up to his assassination. In one such instance, Saeed Karimian’s face was photoshopped in place of Gérard Deprez, who was standing next to Mrs. Maryam Rajavi in the Belgium Senate during a meeting on March 27, 2013. There are other instances as well.

http://www.gdeprez.be/iran-lassassinat-de-saeed-karimian-en-turquie/
https://ncr-iran.org/en/news/iran-world/22693-iran-the-assassination-of-saeed-karimian-in-turkey
In another recent assassination on European soil, on November 3, 2007, the mullahs’ Gestapo assassinated Ahmad Molla Rensi, an Iranian dissident, in The Hague. The victim’s family and friends stated that regime infiltrators in the dissident group carried out the assassination.
The agents who were dispatched to the European Parliament on Wednesday were the same individuals who attacked a meeting of Iranian refugees in Paris on June 17, 2007 and injured a number of participants. French police arrested a number of the assailants, who were agents of the Iranian regime. The below mug shot includes some of the assailants. 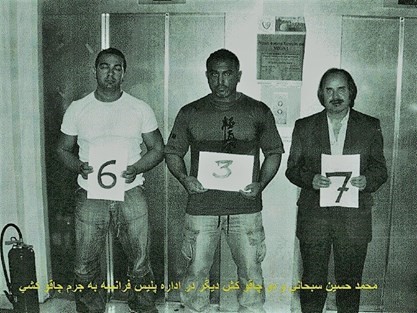 The first person on the right is Mohammad Hossein Sobhani who is touted as a key member of the group.

Another agent dispatched to the European Parliament by the Iranian regime was Ghorban-Ali Hossein Nejad. The said individual was previously arrested by the French Gendarmerie on July 13, 2015 for incitement and disturbance of peace in Auvers-Sur-Oise, headquarters of NCRI in north Paris, while engaging in surveillance and intelligence gathering at the site. Hossein Nejad confessed to French authorities that he was carrying out orders of an MOIS official at the Iranian Embassy in Paris, Ahmad Zarif. Hossein Nejad underscored that Sobhani (one of the assailants in the Paris attack) makes monthly trips from an MOIS station in Germany to Paris to make payments of 500 Euros a month to a number of the regime’s agents including Hossein-Nejad.

http://www.telegraph.co.uk/news/politics/1578897/Christopher-Bookers-Notebook.html
According to the Press Association on 23, January 2008 “The report’s resolution calling for minimum procedural standards of fundamental rights to be applied to blacklisting methods was approved by 101-3. UK delegates on the Council of Europe’s Parliamentary Assembly who approved the resolution included Labour MPs Rudi Vis, Lord Tomlinson, Edward O’Hara and Bill Etherington and Conservative Humfrey Malins. Another Labour MP, John Austin, abstained, and fellow Labour MP Denis MacShane, voted against, alongside two Romanian socialist MP.”

https://www.ncr-iran.org/en/news/iran-resistance/4691-terror-label-against-mojahedin-of-iran-qdisastrousq-effect-of-the-eu-blacklisting
MacShane’s other misdeeds are also becoming of proponents of the Iranian regime. The Daily Telegraph wrote on 2 December 2012, “Denis MacShane has resigned as a Labour MP, after a parliamentary enquiry found that his conduct was the “gravest case” of wrongdoing ever to have been investigated.”
http://www.telegraph.co.uk/news/newstopics/mps-expenses/9651978/MPs-expenses-scandal-Denis-MacShane-resigns.html
Moreover, the Guardian reported, “Ex-minister Denis MacShane jailed for bogus expenses claims. Labour’s former Europe minister pleaded guilty to false accounting after filing 19 fake receipts totaling nearly £13,000.”