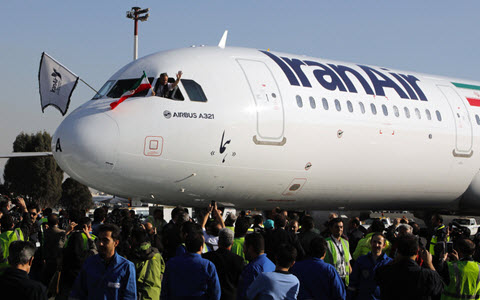 NCRI – US President Donald Trump recently signed a bill named “Countering America’s Adversaries Through Sanctions Act”, or the CAATSA. The subsequent attention drawn to it by the media and public focused on objections to the sanctions that effect Russia.

Very little attention, however, was drawn to one of the provisions that could have serious consequences for American company Boeing. If the company completes the sale of dozens of aircraft to Iran, it could create serious legal liability for itself.

Iran is one of the worst terrorist states in the world, but Boeing has attempted to justify the deal it made for the sale of aircraft by saying that the government of the United States has certified that Iran is sticking to its end of the nuclear deal.
President Trump has criticised his predecessor’s treatment of Iran and with good reason. Former President Obama’s policy of appeasement with the hope of bringing moderation to the regime was a complete failure which just gave the Iranian regime free reign to spread terror even further across the region.

The Trump administration really needs to use the CAATSA to put an end to Iran’s belligerence. There is no denying that Iran is heavily involved in terrorist activities and the involvement of the country’s Islamic Revolutionary Guard Corps (IRGC) is obvious. The CAATSA now means that the IRGC will be listed as a SDGT (Specially Designated Global Terrorist) organisation.

Because of this, any US companies doing business with the IRGC and its Qods Force will be carrying out a criminal act.

This is how Boeing could be severely affected by the CAATSA. The Boeing deal is with Aseman Airlines and its CEO is Hossein Alaei. Alaei has been a high up member of the IRGC for decades.

It is also known that the Iranian regime uses commercial flights for purposes linked to its terrorist activities (i.e. sending supplies, military personnel, arms, etc. to warzones). In the past few years alone, the US imposed several sanctions on Mahan Air because it was transporting members of the IRGC to and from Syria and was also sending weapons for the Syrian dictator Bashar al Assad’s forces. It was also found to be sending weapons to the notorious Lebanese Hezbollah group.

It is time for the international community, including companies like Boeing, as well as foreign governments, to realise that terrorism has made its way through so much of the Iranian government and its major companies that it is not worth the risk to bring business or investment to the Islamic Republic for as long as the situation continues like this.