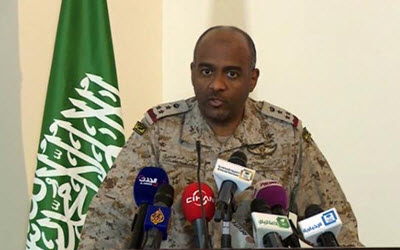 A Saudi official has said that the Trump administration has vowed to increase intelligence sharing with the kingdom regarding Iran. The top military general, Ahmed al-Asiri, also said that the United States is committed to increase defence cooperation against the Islamic Republic’s meddling in the region and against its proxies.

Brig. Gen. Ahmed al-Asiri is an adviser to the kingdom’s defence minister and a spokesman for the Saudi-led coalition currently fighting rebels backed by Iran in Yemen.

The general told reporters on Friday in Washington that Defence Secretary James Mattis and other officials want to increase cooperation in several areas in order to counter Iran’s threat. He said that the US’ commitment will help to rebuild the relationship that was damaged at the end of President Obama’s time in office.

Last week, President Trump welcomed Saudi Deputy Crown Prince Mohammed bin Salman to Washington. A few weeks before this, the State Department allowed the sale of major weapons to Riyadh to go through. President Obama had blocked this sale last year because of concerns about human rights in Yemen.

In 2015, Saudi Arabia launched a military intervention in Yemen along with a coalition of other nations including the UAE, Qatar and Kuwait. Saudi Arabia’s aim is reportedly to restore the government in the country, but analysts say it has now turned into a proxy war between the Sunni Muslim monarchy and Shiite Iran.

The US support for Saudi Arabia was juxtaposed with the signing of the Iran nuclear in 2015.

It was reported last month that Trump’s administration was moving forward with the $300 million deal providing Saudi Arabia with missile technology while there were claims that Saudi military has bombed civilians in Yemen.

Up to 140 people were killed when Saudi fighter jets hit a funeral in Yemen last year. The UN said that the Saudi-led coalition was responsible for nearly two thirds of almost 4,000 civilian Yemeni deaths between March 2015 and August 2016.

Gen. al-Asiri denied that Saudi bombings have resulted in human rights abuses and emphasised that the US is not involved in the Saudi-led campaign. He added that the promises made by the Trump administration mean that US intelligence and military assets are close to supporting Saudi efforts in curbing Iran’s activities in the region.

He said: “We are on the front line, facing the bad behavior of the Iranians in the area. You have a country openly smuggling weapons to militias and terrorist groups and there is no consequences [under] international law. We have to do something against this.”