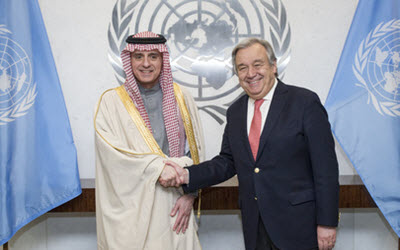 In a meeting with the United Nations Secretary-General António Guterres on Thursday in New York, the Saudi Arabian Foreign Minister Adel Ahmed Al-Jubeir urged the international community to counter the Iranian regime’s meddling in the internal affairs of countries in the Middle East particularly in Yemen.

Mr Al-Jubeir meeting with the UN Secretary General followed the Saudi Foregin Minister’s meeting with a number of U.S. officials in the new US administration in which mutual cooperation between the Washington and Riyadh on facing challenges in the Middle East were discussed.

Meanwhile on Thursday, the United Arab Emirates’ assistant minister of foreign affairs summoned the Charge d’Affaires of the Iranian Embassy in Abu Dhabi, handing him a note of protest on the Iranian regime’s illegal provision of weapons to Houthis in Yemen.

Dr. Abdul Rahim Al Awadi, said that the move by the Iranian regime is in violation of UN Security Council Resolutions prohibiting this, adding that it is considered an attack on international legitimacy, the rule of Yemen, and fuels the conflict there, WAM news agency reported.

He underlined that the UNSC Resolution 2216 on Yemen is “clear” in this respect, therefore, “Iranian weapons and unmanned aircraft which the Arab coalition forces targeted recently, are a clear violation of this resolution.”

It is noteworthy than on Jan. 28, 2017, the Arab coalition forces devastated an Iranian military drone at Yemen’s Red Sea coast “with the support of the UAE’s air force,” reported WAM last Saturday, quoting a Yemeni military source.

The UAE is a participant of the Saudi-led coalition which comprises nine Arab states supportive of Yemen’s legitimate government of President Abd-Rabbu Mansour Hadi.

The coalition has been piloting daily air strikes against the Iranian-backed Houthi group across Yemen since March 26, when Hadi fled to and took refuge in the Saudi capital Riyadh.

The coalition said its intervention aims to restore Hadi’s authority in Yemen.