Scotland’s The National: Calls for justice over Iran’s 1988 massacre of political prisoners from leader of resistance council 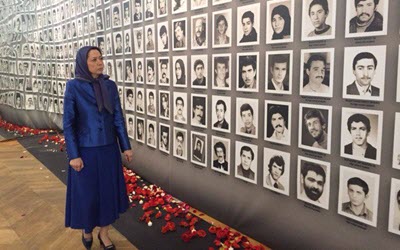 NCRI – The Scottish daily The National published on Friday the call by Mrs. Maryam Rajavi, the President-elect of the Iranian Resistance, to bring to justice the perpetrators of the 1988 massacre of 30,000 political prisoners in Iran. The following is the text of the article published by The National:

ALMOST three decades after more than 30,000 so-called political prisoners were executed by order of a “death committee” in Iran, the leader of the country’s opposition in exile is calling for the international community to pursue those responsible – some of whom are still in government – for crimes against humanity.

Maryam Rajavi, president-elect of the National Council of Resistance of Iran (NCRI), made the call as the row continued in the country about an audio recording of Ayatollah Hossein Ali Montazeri, from a meeting in August 1988, weeks after Ayatollah Khomeini issued a fatwa ordering the massacre of all political prisoners.

In the recording, of which The National has a transcript, Montazeri appears to plead with Khomeini, the leader of the revolution, and a number of judiciary officials to stop the killings. He criticises the hangings of teenagers, pregnant women and those whose only crime was to read the newspaper of the People’s Mujahidin Organisation of Iran (PMOI/MEK).

He said: “The greatest crime committed during the Islamic Republic, for which history will condemn us, has been committed by you. Your (names) will in the future be etched in the annals of history as criminals. Killing is the wrong way to resist against a thought, an idea.

“Responding to a process, a logic – even a faulty logic – with killing will solve nothing. It will make it worse.

“We will not be in power forever. In the future, history will judge us.”

Montazeri, who died in 2009, was favourite to succeed Khomeini, but after the recorded meeting, and his opposition to secret political trials, he was ostracised and between 1997 and 2003 he was placed under house arrest.

The recording emerged on a website maintained by his supporters, but the day after it came into the public domain, the Iranian ministry of intelligence ordered his son Ahmad, a moderate cleric, to remove it.

He was summoned to a special court of clergy, where he was interrogated for three hours.

Ahmad Montazeri said he was also in possession of other documents which he might reveal later.

Several members of the “death committee” are still in senior positions in the current regime of Hassan Rouhani.

Mostafa Pourmohammadi, who in 1988 represented the Ministry of Intelligence and Security, is now justice minister. Former Sharia judge Hossein-Ali Nayyeri is the current head of the Supreme Disciplinary Court for Judges.

NCRI leader Rajavi said the recording was “irrefutable evidence” that leaders of the mullahs’ regime were responsible for crimes against humanity and unprecedented genocide. Khomeini, who died in 1989, had openly declared his support for the mass executions that started the year before, and was “a mastermind of these atrocities”.

Rajavi said Montazeri’s statements confirmed the illegitimacy of the ruling regime from the 1980s and the people’s abhorrence for the velayat-e-faqih (absolute rule of the clergy).

The recorded acknowledgement by officials that they were in the process of massacring the Mujahidin political prisoners left no room for doubt that their actions and those of many other leaders of the regime were a crime against humanity.

She added: “The international community, therefore, is obligated to bring them to justice.

“In particular, because these individuals and the others who carried out the massacre of political prisoners referred to in this meeting have, from the beginning of this regime to the present day, held posts at the highest levels of the judicial, political and intelligence apparatuses.

“Montazeri’s statements, such as his description of the execution of a 15-year-old girl and of a pregnant woman in Isfahan, as well as the statements by the executioners in the meeting, reveal the extent of the ruling regime’s ruthlessness and vengeance against the Mujahidin women.”

However, the regime remained defiant. Mullah Ali Razini, a judiciary official, said: “The security that we have now in Iran… is because Imam Khomeini did not neglect on carrying out the sentence.”

A grandson of Khomeini, Mullah Ali Khomeini, said: “What was the regime supposed to do with these people? It had to fight, and had to fight hard. Praise be to Allah, it did happen and the country saw peace.”