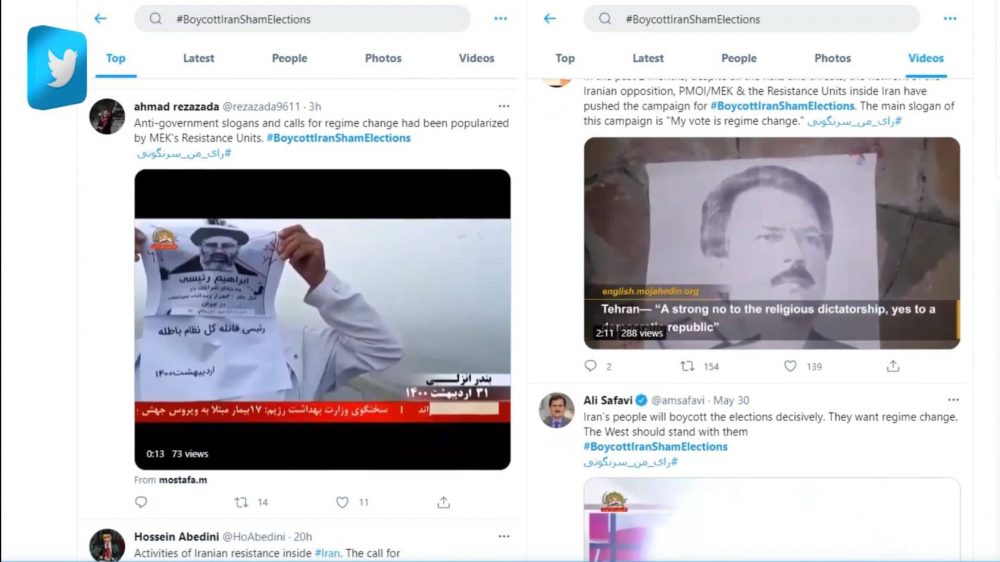 On Sunday, Iranians inside and outside Iran participated in a social media campaign using the hashtag #BoycottIranShamElections. The hashtag received tens of thousands of impressions during the first day of a campaign that calls for the boycott of Iran’s sham presidential election.

For years Iran’s leading opposition group, the People’s Mojahedin Organization of Iran (PMOI/MEK), has been the driving force to boycott the regime’s farce elections. This year the internal network of the MEK, known as the Resistance Units, has led the campaign to boycott the sham elections inside Iran. The resistance units had been sending out footage of their activities promoting a national boycott. Posters of resistance leaders were shown hanging on highway signs and city walls. The resistance’s call to boycott elections was shown graffitied on walls.

Most experts agree that the outcome is not in doubt since the regime’s Supreme Leader Ali Khamenei has made his selection known. Thus the regime’s establishment has lined up in support of the current head of the judiciary, Ebrahim Raisi.

Iranian regime’s Guardian Council announced the final list of presidential candidates last week, leaving only Raisi and six other individuals out of nearly 600 who registered with the Interior Ministry.

In the interest of clearing the way for Raisi, the Guardian Council nullified the candidacies of high-profile figures like former Parliament Speaker Ali Larijani, whose demonstrated loyalty to the supreme leader would have otherwise secured him a position on the ballot. On Wednesday, NCRI Foreign Affairs Committee Chairman Mohammad Mohaddessin explained his situation in terms of an effort by Khamenei to consolidate power in the face of unprecedented challenges stemming from economic collapse, international isolation, and escalating social unrest as embodied by three nationwide uprisings spanning the previous three years.

The first of these uprisings prompted Khamenei and others to acknowledge a fact they had long denied: that opposition to the theocratic system is organized, widespread, and is often an expression of support for the NCRI and the People’s Mojahedin Organization of Iran (PMOI/MEK). In January 2018, Khamenei publicly stated that the MEK had “planned for months” to facilitate the anti-government protests that were then ongoing in more than 100 cities and towns. Accompanying fears of MEK’s influence led authorities to severely crack down on another, larger uprising in November 2019. Some 1,500 peaceful protesters were killed in only days.

This crackdown did not, however, diminish popular support for the organized Resistance movement. Large-scale protests, complete with chants of “death to the dictator” and explicit calls for regime change, resumed less than two months after the November 2019 uprising was suppressed. And in February 2020, the MEK’s influence was exhibited through the success of a boycott campaign accompanying parliamentary elections. Although regime authorities have a long history of exaggerating public engagement with the electoral process, official statistics confirmed that voter turnout at those elections was the lowest in the 40-year history of the Iranian regime.

The MEK and NCRI have promoted similar boycotts throughout that period, but their unique success last year was no doubt driven by the social effects of the prior uprisings as well as widespread activities of MEK’s Resistance Units.

As the online calls for an electoral boycott gain momentum, they are sure to reinforce Iranian authorities’ concern over the role of social media and the internet in political organizing. In April alone, MEK activists posted messages and staged demonstrations in at least 250 localities urging the Iranian people to “vote for regime change.” In May, various groups of citizens endorsed the electoral boycott movement in the context of their own protests for economic or social justice.

In the NCRI press conference on Wednesday, Mohammad Mohaddessin said, “The nationwide call for the boycott of the sham election has gained momentum, and people are openly calling for the regime’s overthrow.” He cited this as evidence of a “looming nationwide uprising waiting in the wings,” which will be “far more intense and widespread than in previous years.”

Previous articleIran: The Staggering Number of COVID-19 Victims Is More Than 302,700
Next articleIran News in Brief – June 1, 2021