Iran: Regime is fearful of use of satellite in villages 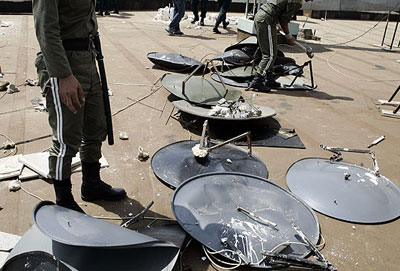 NCRI- A provincial official of the Iranian regime expressed his concern about expanded use of satellite receivers in Iranian villages and called for extensive measures to counter “the cultural offensive” by using “religious organizations and clerics.”

The Iranian regime’s state-run news agency Mehr affiliated to the Ministry of Intelligence and Security (MIOS) quoted Mansour Moradlou, the director of Social Affairs in Zanjan province on January 16, 2013 as saying: “The use of satellite receivers in villages in Zanjan province is alarming.”

“The villages are much more venerable to social damages and their expanded use of satellite is an indication,” He added.

Moradlou emphasized that “there needs to be extensive planning to counter such cultural offensive.”  “The religious organizations and clerics should be used in best possible ways in this regard,” he said.

In recent weeks simultaneous with increase in public hangings and executions, Iranian regime has raided houses in various cities across Iran to collect satellite.