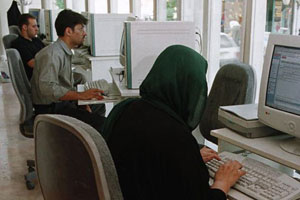 They are the latest among scores of Internet users who have been arrested in Iran this year.

Colonel Shaaban Torknia said of the recent arrests: “With coordination with the judicial authorities, we will deal with individuals who are in contact with foreign networks."

In July, eight Facebook users were sentenced to a combined 127 years in prison for propaganda, insults against state officials and acting against national security. Two of them were sentenced to 50 lashes plus long jail terms.

At the end of May, eight people received a combined 123 years in jail for insulting the country's supreme leader on Facebook.

In late September, eleven people were arrested in Iran for posting 'jokes' about the regime's founder Ruhollah Khomenei on social networking sites.

Mohebipour said the detainees had 'confessed to their wrong-doings', adding: "They have become the stooges of the intelligence services."

Mohseni Ejei said the offensive comments under the guise of jokes about Khomeini had been widely circulated on the Viber, Tango and WhatsApp networks.

Some of the jokes about Khomeini reflect common criticisms of him and the regime's policies and hollow promises, including his pledge to provide free water and electricity.

One joke said 'Khomeini comes home and sees bills for water, electricity, and gas on the ground. He asks, 'Weren’t these free?’

The joke concludes: “Forgetfulness was one of Imam’s weaknesses.”