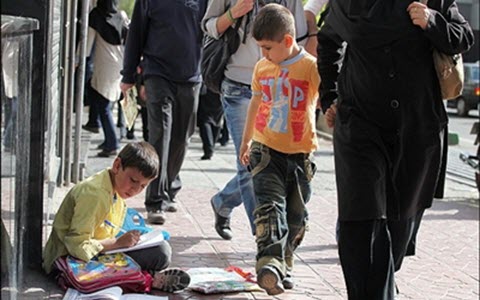 NCRI - Iranian media published reports on seven million child laborers, three million and 200 thousand children dropped out of school, as well as a significant number of children abused in the drug trade and trafficking in Iran.

Sarah Rezaie, a member of the so-called Imam Ali population, reduced the dimension of this social problem and said according to official statistics, there are two million working children in Iran, but unofficial statistics show the number of child laborers is at seven million.

She announced that these children are between 10 to 15 years old and added: “There is some evidences that show even 5-years-old children and babies are also caught in forced labor.”

She described the situation of children working in some of the metropolitan areas of Iran as “disastrous” and said: “In the province of Sistan and Baluchestan, children in the city sell psoriasis pills, tramadol, etc., and this has become a kind of norm.”

Rezaei pointed to the existence of shops in the province that adolescents sell addictive substances such as nas, pan, glass and crack, which the children themselves are somehow addicted to, adding that “in order to carry narcotic drugs, these children are used in other cities of Sistan and Baluchestan province.”

According to her, these children swallow these drugs and after they crossed the border they repel (feces) them, many of whom have died due to this problem. There is, however, no mention about the number of these children.

Sousan Maziarfar, another member of this population, regarding the situation of the children who search in garbage dumps for food… said the average age of these children is 12 years.
“%41 of these children are illiterate and %37 of them have dropped out of the school in order to work,” she added.

According to her, more than %50 of these children live in the centers of garbage collection which is the source of many disease for them.

Maziarfar revealed that many of these children not only face disease but also their face, fingers and toes are chewed and wounded by rats in these centers.

Soraya Azizpanah, a member of the association for protection of the rights of the Children, also quoted Iranian regime parliament’s research center which according to ISNA news agency indicates 3.2 million children have dropped out of school to work.

“The economic situation of working children in Iran has not improved and their families’ livelihood problems have not resolved,” she said.