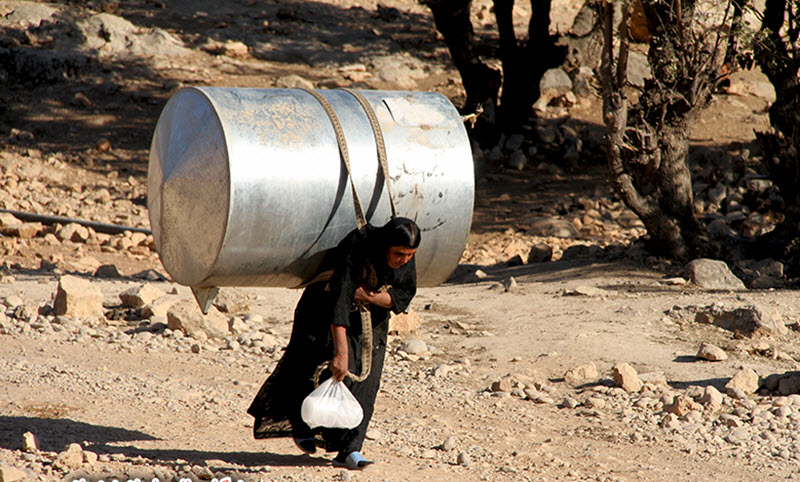 Iran is suffering from a number of environmental disasters and setbacks. The water crisis is particularly serious and effects a large part of the population. Waters are extremely polluted, exacerbated by sugar cane refineries and oil wells. Water shortages and outages and water pipelines that are in a state of disrepair, as well as the health issues causes by the consumption of contaminated water, are just a few of the issues that have been raised during recent protests.

The Iranian regime has mismanaged the water of Iran for decades and now the problems are coming to a head.

One of the worst hit places in Iran is the southwestern region of Khuzestan. There is a shortage of clean and potable water. The periods of drought and the dust storms in the province are making the situation critical. The extreme heat has increased the usual rate of evaporation and rivers are almost running dry. The worst thing about this is that the problems will get worse in the future.

Khuzestan is the worst hit area but other provinces are badly affected. The people of Khuzestan have been taking to the streets to make their voices heard. They are extremely angry and unhappy because their concerns have been ignored. The province is extremely rich in oil, yet the people are living in extreme poverty and their environment is deteriorating around them.

The Iranian regime’s leaders failed to address the ecological impact of increasing industrial activities and the widespread corruption that has spread through the leadership at all levels.

The Regime has overseen the construction of dams that have resulted in main waterways being diverted to other areas and regions. This is leaving the locals without water – not just drinking water, but water to keep the crops growing. People have lost their livelihoods.

The Iranian regime’s neglect of the issues is nothing new. It has a history of doing this, especially with regards to environmental issues. Top environmentalists have voiced their concerns but scientific findings are hidden by the regime officials who tend to deny that there are problems. For years, the brain drain of Iran has seen top academics and scientists leave the country.

A few months ago, dozens of scientists were arrested in May and charged with espionage. This has done nothing but create even more distrust from the people towards the regime.

With the mounting tension in Khuzestan, the regime better be worried because the oil production could be impacted. Local workers could strike or protesters could block access to energy infrastructures. This will then impact the country’s oil exports and the cost of domestic energy.

As the water situation worsens, as we know it will, the Iranian regime will face further protests and instability. The discontent will be voiced across the whole country and there is nothing the regime will be able to do to stop it. The longer the environmental issues are neglected, the more the regime opens itself up to more civil unrest.