As Floods Hit Iran’s Cities, Regime Officials Try to Cover up Their Inaction 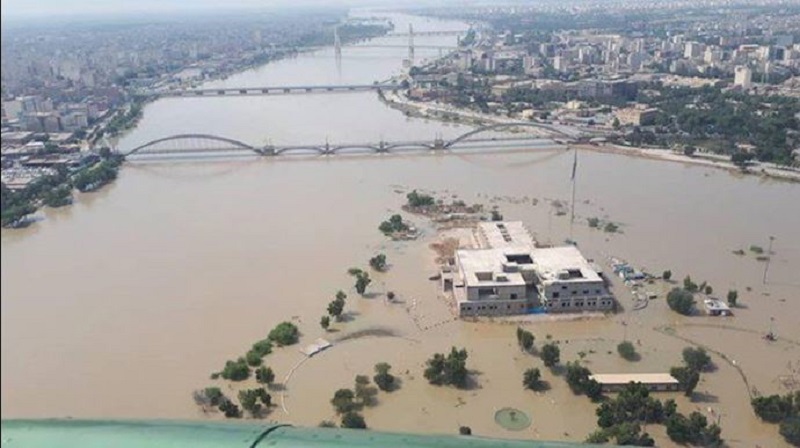 Recent seasonal rains in many southern provinces of Iran have created massive floods and rising water levels especially in the city of Ahvaz. State-run media outlets in Iran have so far reported the deaths of four women in a hospital in Ahvaz.

Reports indicate that people in Khuzistan province, particularly in Ahvaz, are surrounded by water and many were seen taking to their rooftops on Friday, December 20. During cold winter nights, many are forced to sleep in plastic tents. In addition, during the day locals, left without any help from the regime’s authorities, are desperate to find a way to rid their homes of the floodwaters.

December 16 – Heavy rains and floodwaters in Ahvaz and other cities of Khuzestan Province, southwest #Iran.pic.twitter.com/wUgkZEOoyN

The state-run IRNA news agency wired a report and cited the “Khomeini Hospital” chief saying: “Following recent rains and power outages in the hospital, four patients held in the intensive care unit of the hospital lost their lives. Despite the fact that energy power sources were available, it remains unclear why these people lost their lives.” This is clear, yet failed attempt by Iran’s regime to whitewash its mismanagement which has led to this tragic event.

Instead of providing answers and being held accountable over the death of four women held in the intensive care unit, the regime’s officials are more focused on keeping a lid on the true reason behind these four deaths.

One of the locals said: “From 1997 to this day, we are flooded each year. However, there is no one to provide any help for us. What are we to do? Please provide us some help.” A mother says while weeping: “We want authorities to come and at least fix the sewage system. Our children need bathrooms. What are we to do?”

Mrs. Maryam Rajavi, the President-elect of the National Council of Resistance of Iran (NCRI), sent a message of sympathy and solidarity with the victims of the flood.

“My deepest sympathies go out to the people of Khuzestan, Fars, Bushehr, Mahshahr and other flood-hit regions, and to those who have lost their homes. My heartfelt condolences to the families of the victims. Iran’s wealth is being plundered by the ruling mullahs and spent on terrorism, belligerence and anti-patriotic missile and nuclear programs, leaving our people defenseless in the face of natural disasters. The only way to end this pain and suffering and the calamities inflicted on the people of Iran is the overthrow of the clerical regime in its entirety and establishment of democracy and popular sovereignty,” Mrs. Rajavi said.

My deepest sympathies go out to the people of Khuzestan, Fars, Bushehr, Mahshahr and other flood-hit regions, and to those who have lost their homes. My heart-felt condolences to the families of the victims #Iran

The flood earlier this year started after two days of heavy rainfall. According to the regime’s statistics, at least nine people were killed, including two children. More than 10,000 houses were caught in the floods; 70 communicative roads were cut off, and 23,000 people were trapped in the floods.