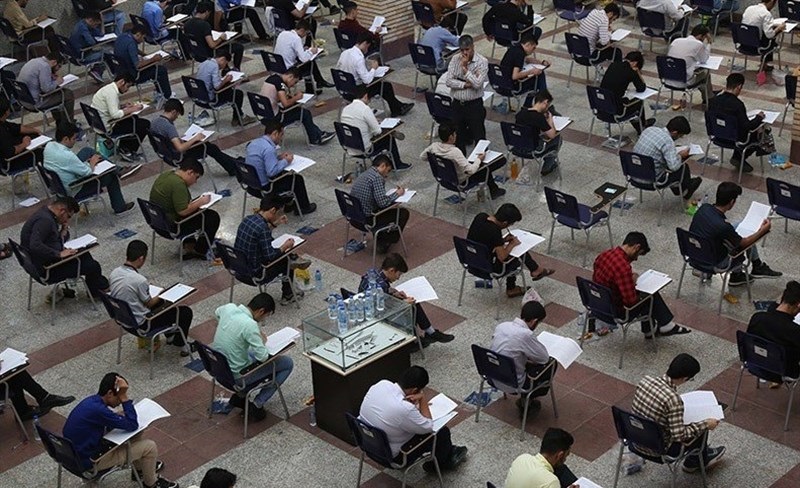 Before holding the University entrance exams, the regime’s President Hassan Rouhani, and his health officials promised to hold these exams with “adequate health protocols,” such as at least two meters of distance between each participant.

A video from Iran obtained by the People’s Mojahedin Organization of Iran (PMOI/MEK) shows hundreds only one place where the entrance exam was held, with half a meter distance.

Holding the university entrance exams will further increase the coronavirus death toll, which has, according to the MEK, rapidly risen to above 91,000. Head of the Tajrish Shohada hospital in Tehran in this regard said: “If the upcoming gatherings such as university entrance exams and Muharram mourning ceremonies are not controlled, we will have an increased outbreak of the disease in Autumn, which coincides with the outbreak of various types of influenza. We will definitely face a severe wave of new cases.”

The People’s Mojahedin Organization of Iran (PMOI/#MEK) announced on Wednesday, August 19, 2020, that the number of #Coronavirus fatalities in 394 cities across #Iran had exceeded 91,200. #Covid_19
https://t.co/JoTQdaWoxj

While Rouhani and the regime’s supreme leader Ali Khamenei forced the university exams to take place, the regime’s officials try their utmost to stay safe. Last week, Rouhani refused to participate in a Parliament session, at the cost of his candidate for the Ministry of Oil Mine and Industry being rejected by the regime’s Parliament. This action even prompted some of the regime’s MPs to react. The regime’s MP Alireza Salimi said: “You [Rouhani] who tell one million students to take the entrance exam, is your blood more colorful than theirs?

But why is the regime holding these exams?

Using COVID-19 as a lever of oppression

The major Iran protests in November 2019 rattled the regime’s foundations. Although the mullahs were able to momentarily thwart their downfall by killing over 1500 people and the international community’s inaction, the nightmare of another uprising and their subsequent downfall, never cast away from their minds. The general boycott of the regime’s sham parliamentary election showed people’s conflict with the mullahs has reached an irreversible point.

So, the regime used the coronavirus to somehow quell the restive Iranian society. But the mullahs are also aware that their deliberate mismanagement of this crisis will increase people’s hatred toward the regime, and an uprising is inevitable.

In this regard, the state-run Mostaghel daily on August 13 wrote: “The Coronavirus was a gift from heaven and a savior. They even put aside China’s management of COVID-19 and instead turned to preaching and giving advice to people. Although these methods have long proven to be inefficient in controlling and correcting the situation. Thus, they [the authorities] left hungry and depressed people alone in a room with a lion and waited for the work to be done. While people are just trying to survive, this instrumental use of the COVID-19 to silence and control the anger of uncategorized starving people was so ruthlessly done that after six months, they not only have not achieved any success in controlling the virus, but according to the official statistics, the situation is out of control.”

The regime’s institutionalized corruption and its need to fund illicit activities in the region has for years motivated the mullahs to plunder the national wealth or seize any opportunity to steal people’s belongings.

This mafia consists of the so-called “educational institutions,” which are in systematic connecting with the regime’s government and other corrupt institutions. Thus, they pushed for the university exams to be held.

Some of the regime’s officials, during their infightings, acknowledged this issue. Ahmad Naderi, a member of the Parliament’s education commission told state television: “The educational mafia agrees to hold the entrance exam in the same deadline and has put a strange pressure on me and my colleagues. Because they have a one-year contract, they must finish the year with the student. As of now, this year’s entrance exam is not over yet. They are registering for the next year’s entrance exam. Some 8 trillion tomans are almost the turnover of this educational mafia. One end of this mafia is in the assessment organization. Unfortunately, I must say that the assessment organization itself illegally conducts exams, tests, and takes money from the people and their children. The assessment organization is also involved in the education mafia.”

The regime’s founder, Ruhollah Khomeini, considered the Iran-Iraq war as a “blessing” like Khamenei who called the COVID-19 outbreak a “blessing and test.” Because both, facing a restive Iranian society, were desperate to find a way to quell the restive Iranian society. Khomeini, to silence any dissenting voice and waste the youths’ potential liberated following the 1979 revolution, sent thousands of youth and students on minefields. These innocent children were literally used as minesweepers.

Now the mullahs are doing the same thing: trying to paralyze the force that shook the regime’s foundation with its uprising in 2018 and 2019.

But this time, after 40 years of oppression, people’s economic grievances, the regime’s growing international isolation, mismanagement of the coronavirus crisis, and the presence of an organized opposition will ultimately mean that the regime will fail in its quest for prolonging its ominous rule.

As Mostaghel daily wrote: “This nation will not forget how it was abandoned during these bitter days.  This will affect the upcoming incidents. Because soon, people will come to their table for eating, and their despair of an empty table will lead them to protest on busy streets.”