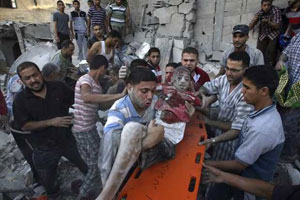 A United Nations school sheltering displaced people in the southern Gaza Strip was hit Sunday by what a U.N. official said appeared to be an Israeli airstrike, as the military struck the Hamas-ruled territory despite signaling a possible scaling back of its 27-day offensive, the Associated Press reported from Rafah.

Gaza health official Ashraf al-Kidra said at least 10 people were killed and 35 wounded after the strike near a boys’ school in the town of Rafah. Robert Turner, the director of operations for the U.N. Palestinian refugee agency in Gaza, said preliminary findings indicated the blast was the result of an Israeli airstrike near the school, which had been providing shelter for some 3,000 people.

He said at least one U.N. staffer appeared to be dead.

“We don’t have confirmed details yet but the initial report says that there was some kind of airstrike in a street outside one of our shelters,” Turner said.

Witnesses said the attack happened while people were waiting in line for food supplies.

A Reuters report said a missile launched by an aircraft struck the entrance to the school, the witnesses and medics said.

Last Wednesday, at least 15 Palestinians who sought refuge in a UN-run school in Jabalya refugee camp were killed, and the UN said it appeared that Israeli artillery had hit the building.