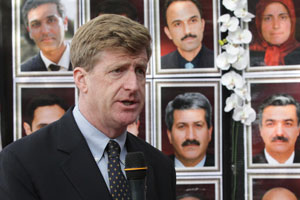 NCRI – The US and European Union must suspend to Iraq in the wake of the Camp Ashraf massacre and capture of seven Iranian dissident hostages it is now holding in a prison near Baghdad, former American Congressman Patrick Kennedy has urged.

Iraq must also immediately release the seven captives and not yield to Iranian demands to extradict them to the regime where they face torture and summary execution, Mr Kennedy told a conference in Parliamentary Assembly of Council of Europe in Strasbourg on Monday.

The nephew of former president John F Kennedy blamed his government for failing to keep its promise to protect the residents of Camp Ashraf, where 52 members of the People’s Mojahedin Organization of Iran (PMOI/MEK) were murdered on September 1.

And he accused Iran – which ordered Iraq to carry out the bloodbath – of a ‘blatant disregard of human rights in Iran and by Iran throughout the world’.

He said: “We have a moral responsibility to these people who were disarmed by the allies and have no way of defending themselves. We have a legal obligation because under Fourth Geneva Convention we put our words behind their protection.

“And we have a national security imperative because they represent the best hope of a future Iran that will not pursue these draconian policies of exporting terrorism and creating nuclear weapons.”

“And the fact that the US is not speaking out when the US was responsible to putting Maliki in power is an affront to the US’s reputation throughout the world and is an affront to all free people that we could deny that these facts exist and we do nothing to correct these situations.

“I call on all of you and I also call on my own government to suspend any foreign aid to Iraq while these seven hostages remain in prison by the Iraqi government.

“How long must we wait before as a body the European Council and the US live up to its charter to protect their rights because what this charter of the Council of Europe is about is human rights.

“I would plead my case with the US to take up a resolution to suspend foreign aid to Iraq and I hope that as Council members in the European Parliament and the Council of Europe you would prevail upon your country to also suspend the generous foreign aid that the European community give to Iraq for the rebuilding of their country.

“How dare they look at us for any more foreign aid while they blatantly violate human rights and international agreement such as the Fourth Geneva Convention?”

He added: “The message of Ashraf is hope for liberty in Iran. They have reignited a passion in those who want to see a free Iran, because you may kill those 52 but you will never kill the dream of Camp Ashraf which is for free Iran, free for people to live in liberty and peace and celebrate humanity. That is the reason they died. Let us make sure they didn’t die in vain.”