Swedish man convicted for nuclear use export to Iran 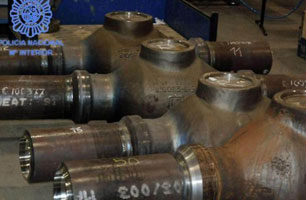 NCRI – A Swedish man has been convicted of knowingly trying to export dual-use technology to Iran, where it could be used as part of nuclear arms production by the Iranian regime, news agencies reported.

The 31-year-old Swede of Iranian origin had been charged with illegal export of two valves which he had been planning to circumvent international sanctions against the Iranian regime by first sending the equipment to Dubai.

The non-corrosive valves can be used in the oil and gas industry, but that the equipment is of such high quality that it is unlikely they would be used for anything but uranium enrichment for the Iranian regime’s nuclear weapons program.

The court in Lund, southern Sweden, ruled that the man knowingly sent the technology to Iran, which faces several trade restrictions due to concerns from the international community that the Iranian regime is planning to develop a nuclear arsenal.

On January 14, the Spanish police arrested two men and seized the contents of a truck bound for Iranian regime loaded with materials destined for use in regime’s nuclear program. The truck, intercepted on a motorway in northern Spain, was carrying highly corrosion-resistant valves. (see the picture)