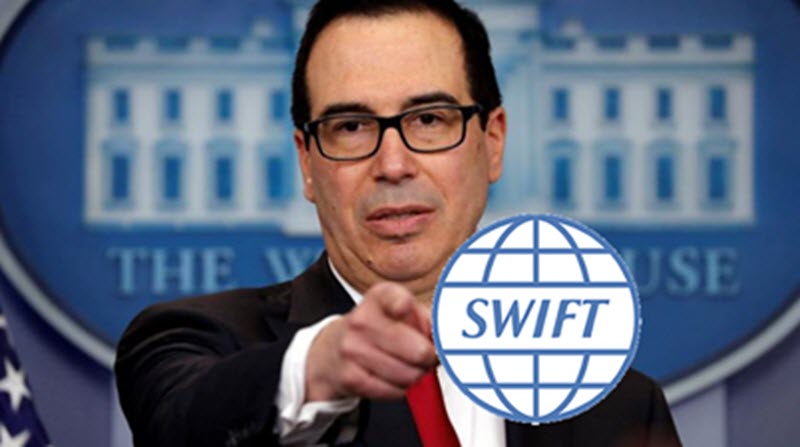 According to reports, US Treasury Secretary Steven Mnunchin said, “I can assure you our objective is to make sure that sanctioned transactions do not occur whether it’s through SWIFT or any other mechanism. Our focus is to make sure that the sanctions are enforced.” The Society for Worldwide Interbank Financial Telecommunication (SWIFT) is a global financial messaging service that connects more than 11,000 banks in more than 200 countries. The US Treasury is in negotiations with the SWIFT network to disconnect Iran.

Mike Pompeo, the US Secretary of State, announced that the upcoming US sanctions will change the way other countries cooperate economically with Iran. However, whether or not Washington will punish the management of the SWIFT payment system if it keeps working with Iranian banks is unclear. Pompeo said, “I don’t know the decision with respect to SWIFT in particular. There are still a number of decisions pending before the November 4 deadline.”

On Monday, in response to the US sanctions, Taiwan’s Mega International Commercial Bank plans to terminate the payment clearing mechanism between Taiwan and Iran, Reuters reported.

During his visit to Iran, French Senator Philippe Bonnecarrere said that Europe wants to ensure that at least one Iranian bank will stay connected to the world after the next round of US sanctions that target the Islamic Republic comes into effect. Europe wants “to have at least one Iranian bank remain connected to the international banking system through SWIFT to keep up commercial relations on goods or services that are not subject to sanctions,” he said during a news conference with French and Iranian counterparts on Sunday. He said that European efforts to help Iranians to continue to benefit from the nuclear deal, despite the US sanctions is “difficult but it’s possible.”

Senator Bonnecarrere, who heads the France-Iran friendship group in the Upper House of France’s Parliament, was in Iran with six other French legislators.