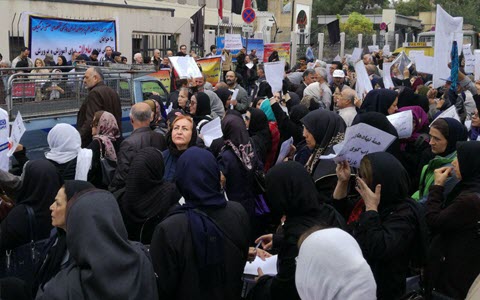 NCRI – The retired teachers and educators rallied in front of the Management and Planning Organization of Iran on teacher’s day, IlNA News reported On October 5, 2017. Thousands of teachers participated in the rally at the invitation of the Coordinating Council of Teacher’s Union in Tabriz, Khoramabad, Shahrekord, Mashhad, Gilan, Yazd, and Khuzestan. The former political prisoners and retired workers also joined the demonstration in Tehran as well.

The teachers of other provinces also rallied in front of the education organizations. The protesters were holding placards written, “Imprisoned teachers, workers, and students should be released.” , “May the unity of retired people last long”, “We demand a salary above the poverty line.”, “Teachers should not be imprisoned.” , and “we stand for our demands.”

Moreover, the protesters were chanting the following slogans, “The imprisoned teacher shall be released. Teachers, students, and workers shall be released. The teachers are aware and they hate discriminations. We have never seen such an inefficient government. May the looters never loot the retirement funds. The teachers and workers must form unity. We want to live happily. Do not give us false promises.”

In Addition, some teachers’ unions are asking for an increase of the education budget, the salary of teachers, and the quality of education especially, in deprived areas. Meanwhile, the contract teachers including the sessional instructors working in public and nonprofit schools put forward their demands.

One of the contract teachers who participated in the rally told to ILNA News, “We have spent the summer without income. Now, the school year has begun and we receive hourly income and this amount is below the minimum wage announced by the Ministry of Labor. The premiums are paid based on the number of our working hours. I guess if I teach for 5 years, I can get retired then!”

One of the retirees said, “We worked at schools for 30 years. We taught children though we faced many difficulties. Now we have to be worried about our medical expenses. The retired teachers have staged rallies several times asking for the equalization of pensions, the strict implementation of the law on civil service management, and the promotion of insurance services.”

Previous articleIran Regime’s Malign Influence in Yemen
Next articleIran: Nationwide Protest by Education Staff in 20 Provinces on the Occasion of International Teacher’s Day