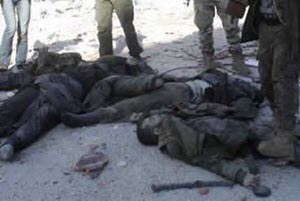 NCRI - According to state-run news agencies affiliated to the Iranian regime’s Islamic Revolutionary Guards Corps (IRGC), an IRGC navy officer along with nine members of the IRGC and mercenaries of its terrorist Quds Force have been killed in the clashes in Syria, and their corpses have been transferred to Iran for burial.

Abdollah Qorbani, the navy officer, was buried in Sahraroud village in Fasa Township of Fars Province, in southern Iran, on Tuesday, January 5. He was killed in Aleppo on January 1.

According a report on Monday in the state-run Tasnim News Agency, the IRGC Quds Force acknowledged that another Revolutionary Guard by the name of Mostafa Khanzadeh from Mazandaran Province has been killed in Syria, but offered no further information.

A Colonel in the Iranian regime's IRGC and a top bodyguard to the regime's Friday prayers leader in Tehran mullah Mohammad Emami Kashani were killed in late December fighting for Syrian dictator Bashar al-Assad's regime in Syria.

Mohsen Faramarzi, who was a personal bodyguard to Emami Kashani, was killed on December 23 in Aleppo, the state-run Fars news agency reported. Fars, which is affiliated to the IRGC, published a photo of Faramarzi standing next to Emami Kashani.

On November 28, the National Council of Resistance of Iran announced that it has obtained reports from inside the IRGC that Qassem Suleimani, the notorious commander of the terrorist IRGC Quds Force, had suffered severe shrapnel wounds, including in the head, while at Aleppo’s southern front.

Qassem Suleimani’s vehicle that was there for him to oversee an operation by the IRGC and a number of hired forces was targeted by the Free Syrian Army severely injuring Suleimani.

Due to the severity of his wounds he was immediately transferred by an IRGC helicopter to Damascus and after receiving preliminary treatment was transferred to Tehran.

At least 100 IRGC officers and trained forces have been killed over the past three months, but only some of their bodies have been transferred to Iran and a large number have been interred in Syria.

The official IRNA news agency declared in June 2015 that the number of those killed in Syria and buried in Iran was 400, while the actual number of IRGC forces and agents killed exceeds 3000 and included some of IRGC’s top commanders who have been killed in the war in Syria.

On November 30, the NCRI published the names of 16 IRGC generals that had been killed thus far fighting for Assad in Syria.