The Iranian regime was directly involved in the killing of more than 500 U.S. soldiers in Iraq by supplying Shiite extremists with advanced roadside bombs, rocket-propelled explosives and other munitions, U.S. military officials say.

“The 500-plus number, during fighting between 2005 and 2011, became the focus of debate last week as U.S. Central Command declassified reports that showed 196 Americans died from Iranian-made explosively formed projectiles (EFPs). But that is only part of the story,” The Washington Times wrote on Monday. 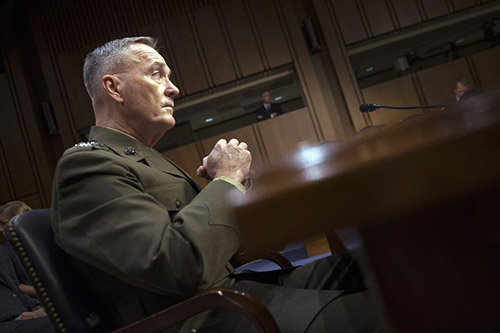 Marine Corps Gen. Joseph Dunford, during Senate confirmation hearings in July, appears to be the first military official to use the 500 fatality figure, attributing it to Iranian “activities.”

“Subsequently, some Republicans opposed to the Iran nuclear deal began citing the number and attributing it to EFPs, since that is the most-talked-about Iranian weapon shipped to anti-American Shiite rebels. Some in the Pentagon grumbled that the 196 number was the result of officials wanting to downplay Iran’s role in killing Americans,” The Washington Times wrote.

But when Gen. Dunford spoke of Iranian “activities,” he was referring to other weapons than just EFPs.

“As it relates to recent reporting on this, some had mischaracterized the CENTCOM data regarding the number of U.S. service member deaths resulting from EFPs in Iraq,” Cmdr. Raines told The Washington Times. “It is important to understand that these CENTCOM statistics on EFP detonations are only a subset of all the Iranian activities estimated to have killed approximately 500 U.S. troops in Iraq during OIF [Operation Iraqi Freedom].”

He added: “There were rocket attacks and IRAM [improvised rocket-assisted munitions] among other tactics that also contributed to American solider deaths.”

The Washington Times added: “It appears that Iran introduced IRAMS into the war around 2008. Shiite extremists mounted the weapons on trucks and drove to points where they could fire the rocket-propelled explosives into an American base. Press reports from Iraq said they were successful in killing Americans.”

“Iran entered the Iraq war in a big way in 2005 by authorizing its Quds special operations forces to train Iraqi Shiite militiamen and supply them with EFPs and other deadly weapons. The EFP is a particularly lethal roadside bomb similar to, but more advanced than, the ubiquitous improvised explosive devices (IEDs).”

“The Quds forces, led by Gen. Qassem Soleimani, set up factories to produce the weapon, which unleashes rocket-type projectiles that penetrate American armored vehicles. As head of the Islamic Revolutionary Guard Corps’ Quds Force, Gen. Soleimani is Iran’s top terrorist commander, committed to the downfall of Israel and the United States and the destabilization of governments in the region.”

Gen. Dunford’s testimony on Iran’s treachery came at his Senate confirmation hearing to be the next chairman of the Joint Chiefs of Staff.

“Senator, I know the total number of soldiers, sailors, airmen and Marines that were killed by Iranian activities, and the number has been recently quoted as about 500,” Gen. Dunford said. “We weren’t always able to attribute the casualties that we had to Iranian activity, although many times we suspected it was Iranian activity, even though we didn’t necessarily have the forensics to support that.”

“Forensics” was likely a reference to post-bombing examinations to find the telltale materials — often copper — of an Iranian EFP, as opposed to a more rudimentary IED. It was also a reference to any shrapnel or engine parts left by Iranian rockets.

Sen. Cotton took Gen. Dunford’s answer to mean that the U.S. had confirmed the 500 figure and that likely many more were also killed by Iran.

Said Sen. Kelly Ayotte, New Hampshire Republican: “Certainly Iran has the blood of American soldiers on its hands for the explosive materials that they provided to the Shia militias in Iraq that killed many of our men and women in uniform.”

Sen. Cotton continued his exposure of Iranian killings at a subsequent Senate Armed Services Committee hearing on the nuclear deal itself. He elicited a statement from Army Gen. Martin E. Dempsey, Joint Chiefs chairman, on how EFPs kill.

“A copper cone is melted at superhigh temperatures and projected, and essentially burns its way through armor plate,” Gen. Dempsey testified.

He said “several hundred” Americans were killed by EFPs, which he attributed to Iran.

Another EFP expert is retired Army Gen. Stanley M. McChrystal, who directed terrorist manhunts in Iraq. He told The New Yorker magazine: “There was zero question where they were coming from. We knew where all the factories were in Iran. The EFPs killed hundreds of Americans.”

Retired Army Lt. Gen. Michael Barbero, who ran the Pentagon office in charge of defeating roadside bombs, wrote in The Weekly Standard last month that the Iranian regime’s proxy war against America “was abetted by a particularly lethal weapon: explosively formed projectiles (EFPs). A form of roadside bomb with a sophisticated triggering mechanism and the ability to penetrate American armor, EFPs were estimated to account for 20 percent of U.S. deaths. And they came from only one place.”

More than 3,000 American service members died in Iraq between 2005 and 2011. A 20 percent estimate means that more than 600 died from EFP attacks, if that statistic is correct.

Another senator calling out the Iranian regime’s desire to kill Americans is Republican presidential candidate Ted Cruz of Texas.

Phil Novack, his spokesman, said the senator has asked Defense Secretary Ashton Carter to inform the families of the 500 service members cited by Gen. Dunford “that their loved ones were murdered by the same man who will now receive sanctions relief.”

“The fact remains that General Soleimani, a man responsible for the deaths of hundreds of American service members, will receive sanctions relief to the tune of millions of dollars if the Iran deal is approved,” Mr. Novack said.

U.S. officials have said that U.S. sanctions on Gen. Soleimani’s assets will stay in place, but he will receive relief from other nations and will be able to travel more freely.

“The People’s Mujahedin of Iran (MEK), the largest opposition group to Iran’s Islamic theocracy, issued an intelligence report in 2007 describing in detail the Revolutionary Guard’s role in arming and training fellow Shiites to kill Americans. This was about the time that the George W. Bush administration executed a major shift in policy and ordered a ‘surge’ of more U.S. troops, primarily to defeat a Sunni insurgency, including al Qaeda in Iraq,” The Washington Times wrote.

“Iran organized and trained Iraqi Shiites at a base north of Tehran called Imam Ali, and the Quds Force did similar training at a facility south of the capital before inserting the extremists back inside Iraq.”

“The Imam Ali base, historically the central location for training terrorists, has now been allocated entirely to the training of Iraqi militia,” said the MEK (PMOI) report.

“The Iranian regime is secretly engaged in the organization and training of large Iraqi terrorist networks in Iran and sending them back to Iraq, to heighten insecurity and instability and force the coalition forces to leave Iraq, which would in turn pave the way for the establishment of an Islamic republic in Iraq,” the MEK (PMOI) report said.