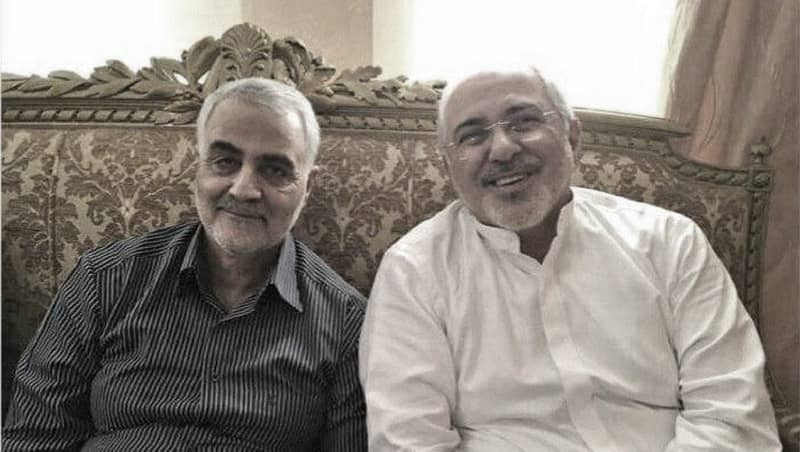 Just ahead of the one-year anniversary of the US drone strike that killed Iran’s top terrorist operative, the regime’s official media published retrospective commentary on his life. This included notes from a deputy to Iran’s Foreign Minister, affirming that Mohammad Javad Zarif and Qassem Soleimani maintained a close working relationship right up until the latter’s death.

Deputy Minister of Legal and International Affairs Mohsen Baharvand was quoted as saying, “I will never forget that when I went to the Political Studies Office of the Ministry of Foreign Affairs almost every Tuesday at 7:30 am to attend a strategic meeting on foreign relations, I saw the glorious martyr, General Haj Qassem Soleimani, who was escorted out of the meeting room by Dr. Zarif.”

Baharvand’s recollection confirms what Foreign Minister Zarif had himself said in 2019 around the time he was invited to visit the headquarters of Iran’s hardline paramilitary, the Islamic Revolutionary Guard Corps (IRGC). As well as describing that visit as a great honor, the regime’s top diplomat emphasized that he always coordinated closely with Soleimani, who had long been serving as the head of the IRGC’s foreign special operations division, the Quds Force.

According to Zarif, that coordination was facilitated by weekly meetings, presumably the same meetings that Baharvand often saw the two men leaving together. As to the content of those meetings, Zarif seemed to indicate that there was rarely, if ever, serious disagreement between them with regard to the regime’s foreign policy objectives and strategies. “Commander Soleimani and I never felt we had any differences,” he was quoted by state media as saying in September 2019. “We have been working together closely for over 20 years.”

Such lengthy collaboration made Zarif a party to many of the Iranian regime’s most serious crimes and destabilizing activities throughout the region and the world. If the two men “never had any differences,” then Zarif would have supported Soleimani when he played a leading role in propping up the Syrian dictator Bashar al-Assad, thereby drawing out that civil war that has killed hundreds of thousands and displaced millions. The two men would have also agreed upon Iran’s efforts to instigate another civil war in Yemen via the Houthi militant group. The present conditions there have frequently been described as the world’s worst humanitarian crisis.

A lack of serious differences between Soleimani and Zarif would also have had consequences for the Iranian people themselves.

Although Soleimani’s primary role was to project Iranian power beyond the nation’s borders, he was also known to contribute to the suppression of domestic dissent during certain periods of unrest. “During the 1999 and 2009 seditions, Haj Qassem was on the streets to fight the anti-revolutionaries and took effective measures to contain the insecurity and riots,” said the IRGC’s former high commander Mohammad Ali Jafari in eulogizing the Quds Force leader shortly after his death.

Although Zarif did not take on his current role until after Hassan Rouhani was elected as regime’s president in 2013, his diplomatic career has long entailed downplaying the Iranian regime’s human rights abuses for international audiences. Roughly two years into his tenure as Foreign Minister, while countless people were still languishing in prison for their participation in the peaceful demonstration of 2009, Zarif famously declared during a discussion at New York University that Iranian authorities “do not jail people for their opinions.” Such laughable claims eventually led the US administration to sanction Zarif and place limits on his freedom of movement inside the US, explaining that his role is more akin to that of a “propaganda minister” than a foreign minister.

Those sanctions came fairly soon after the US took the long overdue move of blacklisting the entire IRGC as a terrorist organization. The Quds Force had been subject to that description for years, but the expanded designation acknowledged something that Iranian dissidents and pro-democracy activists had long emphasized: that there is no meaningful separation between the functions or the ideologies of different wings within Iran’s paramilitary apparatus. In this sense, Soleimani’s dual foreign and domestic roles are representative of how the IRGC itself operates.

This is how the regime, as a whole operates. Western powers have long tended toward conciliatory policies for dealing with the regime because their policymakers operate on the assumption that there are distinct “hardline” and “reformist” factions of Iranian government, with the latter representing opportunities for productive international dialogue and a change in behavior by the leadership in Tehran.

Zarif’s own comments – and Baharvand’s corroboration – fly in the face of this assumption. They seem to confirm what the NCRI has been saying all along: that the “hardliners” and the “reformists” are only two sides of the same coin and their differences consist, at most, of applying different tactics to the same malign objectives. If that is correct, then it is reason enough for a serious reevaluation of Iran policy by those Western powers that have just spent more than two years pushing back against the US policy strategy of “maximum pressure” on the entire regime.

The history of close coordination between the Foreign Ministry and the Quds Force is something that the incoming US administration and its European allies need to take into account in their policy towards the regime. As it has always been said by the NCRI and admitted by Zarif himself, and now Baharvand’s comments “Zarif and Soleimani are flip sides of the same coin, elements of a terrorist regime with no regard for human life.”