Terrorism and Extremism Has Finally Caught up With Mullahs’ Regime 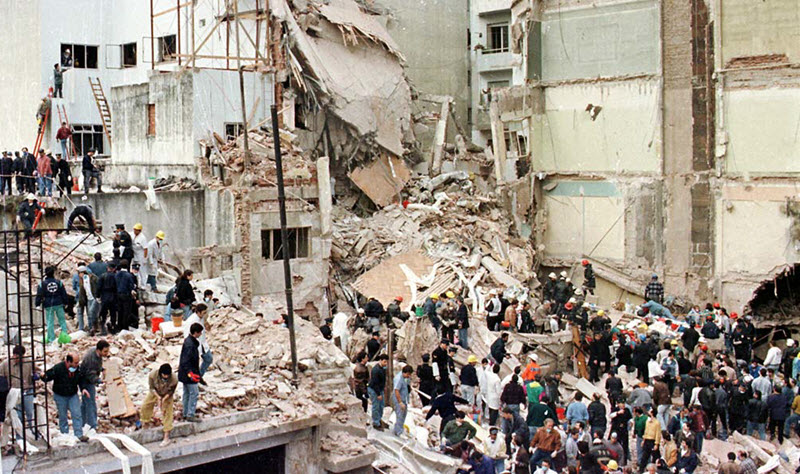 July 18th 1994 is the anniversary of a terrorist attack on foreign soil carried out by the Iranian regime’s proxies in Argentina. The attack a.k.a AMIA leveled a five story building in the capital Buenos Aires. According to the information collected from local authorities 85 people lost their lives and some 300 others were injured. Soon it was made public that the bombing was planned and ordered by the Iranian regime and carried out by Lebanese Hezbollah and its offshoot Ansar Allah.

The fingers were quickly pointed at the regime in Tehran for masterminding the plan. High ranking officials of the mullahs’ regime were the prime suspects and later Interpol notices for their arrest were issued by the Argentina judicial officials prosecuting the case.

As a follow up last week Argentina’s judicial official prosecuting the case refreshed his call for arrest of Ali-Akbar Velayati, former regime’s foreign minister traveling to Moscow and Beijing. He is still wanted for his role in AMIA.

The Iranian Resistance’s analysis of the terror attack which was based on tips from inside sources confirmed the regime full participation in the attack.

The Washington Post ran an article based on the information provided by the National Council of Resistance of Iran (NCRI) on August 10, 1994. According to the Post many high officials in Tehran were implicated. Among the suspects were top dogs such as former regime’s president Ali-Akbar Hashemi Rafsanjani. After receiving a green light from the Supreme Leader Ali Khamenei, then Revolutionary Guards (IRGC) and the Quds Force commander Ahmad Vahidi were tasked to execute the plan.

The impact of such unquestionable intelligence out in the open made it impossible for then Argentina’s President Carlos Menem not to react. He pictured those involved in the attack as Islamic extremists hired by the Iranian regime. Although the case went cold for a while in Argentina’s judicial system, a brave judge revived it again. The judge, Alberto Nisman paid the price for his action with his life and was assassinated on January 18, 2015 in his home.

The monstrosity of the Argentina’s terror attack snowball soon became an avalanche and in 2005, Cardinal Jorge Mario Bergoglio, who would later become Pope Francis, was the first public personality to sign a petition for justice in the AMIA bombing case.

AMIA has become the center of international attention again because of the most recent terror attack planned and executed by an Iranian regime’s diplomat, in Paris last month. The bomb meant for a huge rally organized by the NCRI.

The Paris attack was foiled in time by security forces in France with the help from their German and Belgian partners. Timing of the plot was significant because Hassan Rouhani was scheduled to visit Austria the next day. The Iranian diplomat stationed in Vienna, Assadollah Assadi, who masterminded the plot was caught red handed after passing the explosives and detonator to an Iranian born Belgian couple to carry out the attack.

To put some flesh on the bones, the Iranian regime’s history is marred by terrorism and hostage taking for blackmail and political leverage. It all began with taking American diplomats hostage for 444 days in Tehran in late 70s.

In the past seven months, following the first spark of new round of protests in Iran in late last year and early this year, Iran has been on edge. In a domino effect, cities in Iran from Mashhad in the northwest, where the first protests kicked off, have fallen to unrest. The protests have mushroomed in over 143 cities despite the most aggressive security measures adopted by the regime. The participants in the protests gatherings across Iran chanted slogans unheard of in the past. “Clerics shame on you, leave our country alone,” or “Death to Khamenei, Death to Rouhani,” and “Reformists, conservatives, the game is over.”

Saeed Hajjarian an architect of Iran’s Ministry of Inelegance and Security (MIOS) recently has this to say about Iran’s uprisings: “We no longer have an internal feud among ourselves. The real challenge today is with those determined to bring down the entire system.”

The final chapter of the theocratic regime in Tehran is unfolding. Wreaking havoc through the region and beyond by fomenting terrorism and extremism has finally caught up with mullahs’ regime. It is up to the rest of the world not to let it off the hook this time.