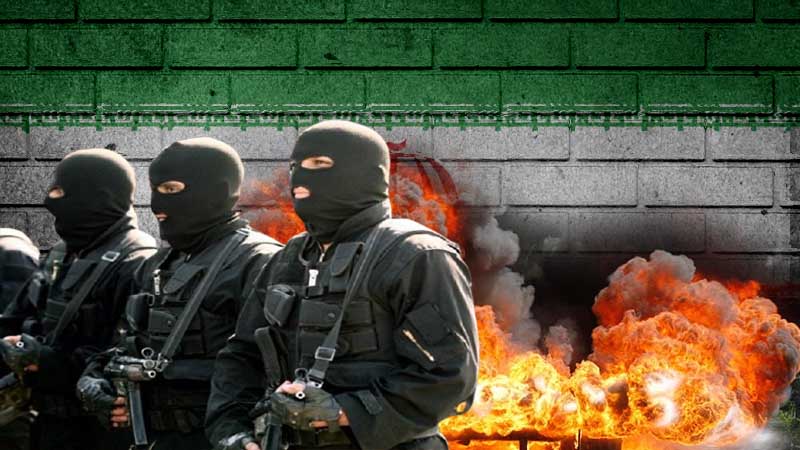 In its annual report on terrorism, the United States Department of State underlined the terrorist threats posed by the Iranian regime. This report revives the need to counter Iranian terrorism amid the talks in Vienna and Western governments’ efforts to restore Iran’s nuclear deal.

The report highlights how Tehran has been using its Revolutionary Guards (IRGC) Quds Force to support terrorist organizations across the globe. The Iranian regime’s network of terrorism and espionage stretches from Africa to South America, Europe, and Asia.

The report underlines that the Iranian regime “provide cover for associated covert operations, and create instability in the region,” and supports terror groups in Iraq, Syria, Lebanon, and Yemen.

On December 7, 2021, the U.S. Department of Justice uncovered two large caches of Iranian weapons seized in late 2019 and early 2020 while en route to Yemen via the Arabian Sea.

In a press conference on October 6, 2021, the Iranian Resistance unveiled Tehran’s massive UAV program details. The new information about the regime’s UAV program, operated by the IRGC Quds Force was gathered by the network of the Mojahedin-e Khalq (MEK) inside Iran. The regime’s terrorist proxy groups have used these UAVs to spread chaos in the region.

Tehran’s support of terrorism in the Middle East and other Muslim Countries has continued since 1980. The absence of a firm international response to the regime’s terrorism has encouraged Tehran to continue its malign activities and spread them worldwide, mainly in Western countries.

The most prominent case of the regime’s terrorism in Europe is the foiled bombing of the Iranian Resistance’s rally in 2018 in France. The Iranian regime’s diplomat-terrorist, Assadollah Assadi, attempted to bomb the “Free Iran” rally but was arrested shortly before the operation, along with his three co-conspirators.

On November 17 and 18, a court in Belgium heard the appeal cases of Assadi’s accomplices who, along with Assadi, received heavy prison sentences in February 2021. The court session continued on December 9, when two explosive experts revealed some of the shocking dimensions of the possible casualties if the bomb had exploded.

The Iranian regime’s terrorist activities are not limited to the 2018 foiled bombing. During Assadi’s trial, it was revealed that he operated an extensive network of spies across Europe. Recent arrests of many Iranian operatives shed light on Iran’s dark and rooted terrorism in Europe.

In November 2018, Swedish authorities arrested Mohammad Davoudzadeh Lului for his cooperation with Iran’s Ministry of Intelligence and Security (MOIS). He was plotting to assassinate an Iranian dissident in Denmark.

In September 2021, Swedish newspapers, including Aftonbladet and Expressen, reported that a former Swedish security police chief, Peyman Kia, had been arrested for spying for four years between 2011 and 2015. Kia had obtained Swedish citizenship and worked as a director in the Swedish Security Police (SPO) and an analyst in a Swedish military organization, acting as Iran’s spy.

The Iranian regime’s terrorism in Europe dates back to the 1980s. This fact was highlighted in November 2021, when, according to the Norwegian Broadcasting Corporation (NRK), the Norwegian National Criminal Investigation Service accused Lebanese national and a former senior Iranian diplomat at the regime’s embassy in Oslo. The duo had attempted to assassinate William Nygaard, the former head of the Norwegian publishing company Aschehoug, who had published the Norwegian edition of Salman Rushdie’s novel, The Satanic Verses.

The Iranian regime’s terrorism is the elephant in the room that, sadly, Western governments try to ignore. Tehran has been using terrorism as leverage to put pressure on the world community to continue its weak approach toward the regime.

History has proven that any weak approach toward a rogue regime will indeed increase their hostile actions. The only way to counter the Iranian regime’s terrorism is to impose genuine sanctions on it and end any conciliatory policy toward this regime. The regime’s embassies should be shut down, and its agents should be expelled from all Western countries, and this would undoubtedly curb the regime’s terrorist activities.