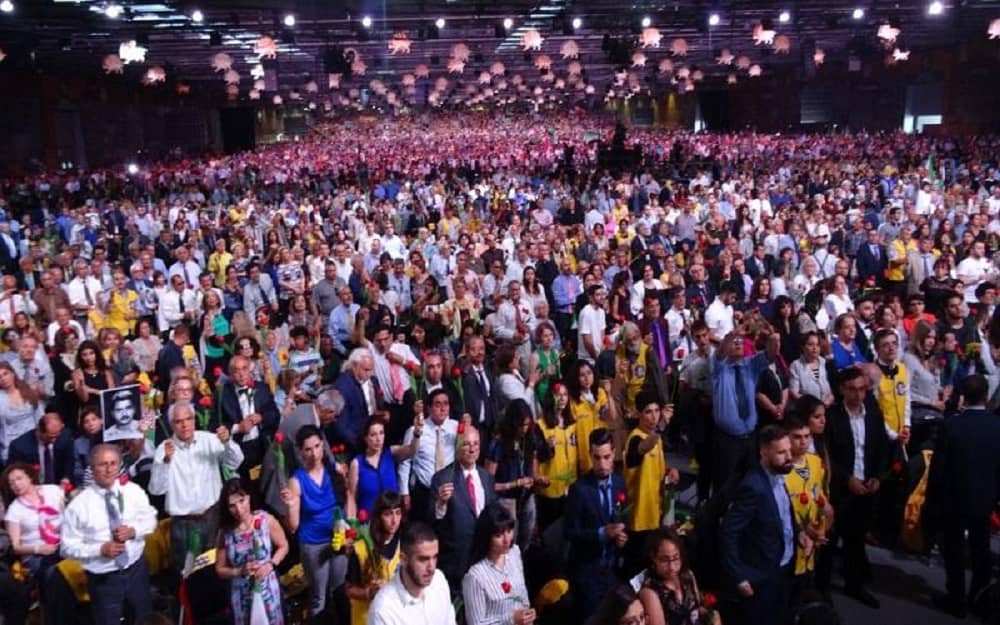 On Wednesday, approximately 70 lawmakers, legal scholars, and human rights organizations from across Europe and the Americas issued a statement condemning the prospective release of Assadollah Assadi, an Iranian diplomat sentenced last year to 20 years imprisonment in Belgium for his attempt at overseeing a terrorist attack on Iranian expatriates and international supporters of Iran’s pro-democracy opposition.

On June 30, 2018, two Iranian-Belgian operatives were stopped by authorities while traveling in the direction of the French border. More than 500 grams of the high explosive TATP was then found in a toiletry bag and later was partially detonated while being handled by a bomb-disposal robot. Although a supposedly safe perimeter had been set up beforehand, a Belgian police officer was slightly injured by the explosion, and the incident helped to illustrate the potential that existed for widespread loss of life hand the bomb was placed where intended.

The following day, Assadi was arrested in Germany before he was able to return to Austria where he held his diplomatic post and enjoyed diplomatic immunity. The subsequent investigation and trial established a number of vital facts, including that Assadi had personally carried explosives and a detonator into Europe from Iran before handing them off to his co-conspirators at a meeting in Luxembourg. Belgian prosecutors also made it very clear that Assadi had not been acting on his own accord but had received orders for the attack from high within the Iranian regime.

Such high-level commitment to an act of terrorism on European soil was indicative of the severe trouble the regime found itself in following a seemingly spontaneous nationwide uprising at the end of 2017 and the beginning of 2018. That trouble persists to this day, with Iran having since undergone eight further uprisings, with the largest encompassing nearly 200 cities and towns.

Much of the ongoing unrest is attributable to the organizing efforts of “Resistance Units” affiliated with the People’s Mojahedin Organization of Iran, the very same organization that Assadi targeted with his 2018 plot. The bomb’s intended destination was an exhibition center in the French town of Villepinte, just outside Paris, where the National Council of Resistance of Iran had held a number of previous summer rallies celebrating the prospect of Iran’s domestic population throwing off the rule of the theocratic dictatorship.

In handing off the explosives, Assadi reportedly instructed his agents to place the bomb as close as possible to the stage and to detonate it when Maryam Rajavi, the NCRI’s President-elect was speaking. This illustrates that the desire to strike a blow against the pro-democracy opposition had overridden most of the regime’s other considerations since the nature of the attack would have almost certainly resulted in injury and loss of life among any number of the European and American dignitaries who were seated nearby at the time.

The MEK, the NCRI, and their supporters began levying criticisms against Western powers very soon after Assadi’s arrest when it became clear that they had little intention of demanding accountability from higher Iranian authorities. The current state of unrest inside Iran virtually guarantees that the same incentives exist for future attempts to attack the opposition, even at the risk of an international incident. Meanwhile, the lack of high-level accountability makes the latter risk much smaller than the risk associated with the continued growth of the opposition’s socio-political influence.

This is to say that the Iranian regime enjoys a longstanding sense of impunity, which has only been reinforced in the wake of the 2018 terror plot, and which stands to be reinforced even further if Assadi is released as expected. Tuesday’s letter to Belgian Prime Minister Alexander De Croo emphasized that that release “would make a mockery of the rule of law and foster further impunity for the regime and its officials involved in terrorism and crimes against humanity.”

It went on to say that the release would also “encourage more Iranian terrorism on EU soil and reassure Iranian state officials that they could evade responsibility for major international crimes.”

The letter warned that “Iran is currently engaging in hostage diplomacy” and that if Belgium were to reward that strategy with the release of such a high-profile prisoner, it would only encourage the regime to take still more Western nationals hostage while demanding ever greater concessions in exchange for their release. Currently, there are around 20 such hostages being held in Iran, and there may be many others whose cases have not yet been made public.

The stage was set for an exchange on March 11. That is the date when Iran and Belgium signed their agreement for the “Transfer of Sentenced Persons”. The treaty was only made public when it was presented to the Belgian parliament at the end of June, and by the end of August, it had been approved by both countries’ legislatures. At the same time, it had been roundly condemned by countless critics of the Iranian regime, with MEK activists even staging simultaneous demonstrations in several Western capitals.

While those demonstrations have yet to provoke serious, public reconsiderations of existing policy by Belgian or any of its allies, they have succeeded in raising the profile of the case and the associated treaty, while highlighting the broader danger of Iranian terrorism in the midst of Iranian impunity. Tuesday’s statement conveys support from the likes of US Ambassador Ken Blackwell, former Canadian Foreign Minister John Baird, and Prof. Stefan Trechsel, a former president of the European Commission of Human Rights.

The statement warned that the language of the pending treaty effectively guarantees that Assadi will be pardoned by his own government as soon as he returns to Iran, which could open the door for him to continue remotely overseeing operations against Western targets, with little fear of reprisal or consequences. The letter concluded by saying, “Rather than helping to foster impunity in Iran by releasing a convicted terrorist, the Belgian government should unequivocally declare that Assadollah Assadi will not be released back to Iran and that he must serve the remainder of his sentence in Belgium.”