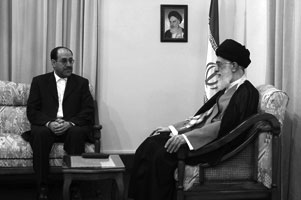 Ali Khamenei has told leaders of Iraq's ruling coalition that al-Maliki's premiership should not be undermined and replacing him was a 'red line' for Iran, it was reported.

Sources told Iraq's al-Rafidain TV on Sunday March 24 that the Supreme Leader believed ousting al-Maliki would cause a schism within the National Iraqi Alliance.

But sources also told the Iraqi TV channel that many Iraqi leaders believe al-Maliki's policies have plunged his country to the brink of civil war.