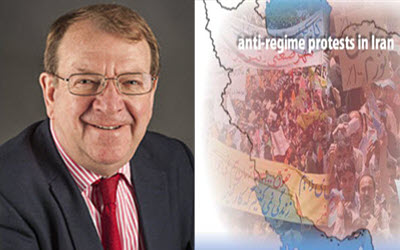 A rising tide of protests inside Iran has triggered a brutal backlash by the clerical authorities, former European lawmaker Struan Stevenson has argued.

Seven thousand additional plain-clothes "morality police" have been deployed only in Tehran to clamp down on women accused of "bad hijab" and other breaches of morality. Crackdowns on social media and the press have also been ordered, added Mr. Stevenson, who was President of the Friends of a Free Iran Intergroup at the European Parliament from 2005 to 2014.

"Meanwhile, demonstrations have continued in central Tehran and other cities denouncing the detention of trade union leaders and political prisoners and demanding job security and labor rights. Workers complain that they have to toil for 15 hours a day and still cannot afford to feed their families. There are daily complaints and protests about the vast level of theft and embezzlement involving high-ranking government officials. The Iranian regime's response has been to ratchet up the number of executions and other barbaric punishments in a bid to terrorize the population into submission," he wrote.

"While the West continues to applaud the smiling President Hassan Rouhani, the reality is that since he took office in 2013, at least 2,300 men and 66 women have been executed in Iran, many of them hanged in public. In April this year alone, there were 57 hangings, including four women. Also in April, a woman was publicly flogged in the city of Golpayegan in Central Iran. A 31- year-old man, who was blinded in one eye in March 2015, has now been sentenced to have his remaining eye blinded with acid due to a failure to pay 'blood money' to his alleged victim. On May 8, a 39-year-old man had his fingers amputated in the city of Mashhad after being found guilty of theft. This is the nature of law and justice in the rotten and decaying regime of velayat-e-faqih (absolute clerical rule), dominated by the fascist mullahs."

"And yet the West is now beating a path to the door of this regime, drooling at the prospect of rich profits to be reaped following the ending of sanctions in the wake of the nuclear deal. On April 16, Federica Mogherini, the EU's High Representative for Foreign Affairs and Security Policy, was in Tehran with seven EU commissioners for discussions with the government officials on trade and other areas of cooperation. No mention was made of human rights abuse, the oppression of women, the suppression of workers, the imprisonment of journalists and the barbaric punishments that have become an everyday occurrence."

"We are still spellbound by Iran. We are still pursuing the failed policy of appeasement of the mullahs. President Barack Obama's nuclear deal with Iran was pushed through to secure his footnote in history. He swept aside all warnings and fears and signed an agreement that effectively ended sanctions on Iran and released billions of dollars of frozen assets, providing a windfall for a government that was teetering on the brink of economic collapse. But far from investing in its own people, the mullah-led regime has used this money to redouble its spending on weapons and on exporting terror through Iran's Islamic Revolutionary Guards Corps and Quds Force, both of which are listed terrorist organizations in the West and both of which are involved in almost every conflict in the Middle East, particularly in Syria."

"Indeed only last week Rouhani travelled to Kerman in South-Eastern Iran, the hometown of Gen. Qasem Soleimani, the Quds Force commander, to heap praise on this leading terrorist, who has been involved in some of the worst atrocities in Syria and Iraq. The IRGC and the Quds Force supply arms, money and military personnel to every Middle East conflict zone. Iran's main export is terror. As well as Yemen's Houthi rebels, Iran funds and supplies Hezbollah in Lebanon, Hamas in Gaza, Bashar al-Assad in Syria and the brutal Shi'ite militias in Iraq. This is the real Iran under the theocratic rule of the Ayatollahs, whose so-called 'moderate' president Rouhani the West believes it can do deals with."

"Western companies should be aware that when dealing with Iran, they are effectively dealing with the Revolutionary Guards Corps. Iran's economy is mainly in the hands of Khamenei's gang and the IRGC. Trading with this deeply corrupt regime is a high-risk venture; the absence of political and economic stability make investing in Iran a precarious business. Any money the regime gets is quickly rolled over into warmongering and terrorism."

"Recently the Iranian opposition revealed that after the nuclear deal was signed, Tehran contributed several billion dollars to Assad to be able to purchase weapons from Moscow and continue his bloody civil war in Syria. Our governments would do well to think long and hard before they do business with Tehran. Those who put profits before people and human rights will not be quickly forgotten when this criminal regime is toppled and freedom and democracy are restored in Iran," Mr. Stevenson added.