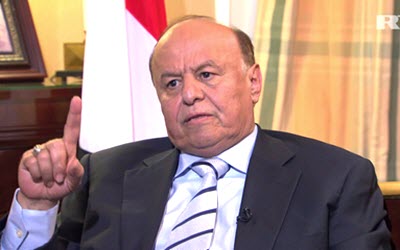 NCRI - Yemen’s president, Abd Rabbuh Mansur Hadi, emphasized in his speech that the experience of war and conflict in Yemen over the past year shows that in playing a role (in the conflict), there is a coalition and coordination between the Iranian regime, al-Qaeda and the Houthi putschists.

“The experience of the war inflicted on Yemen nation by the putschists (conductors of coup) backed by Tehran has clearly exposed the level of coordination and sharing of role between Iranian regime and al-Qaeda terrorist group and Houthis putschists,” he said.

“We have abundant evidence of the coordination and cooperation between the three axes of Iran, Houthis and al-Qaeda, the most obvious of which was exposed after the occupation of the cities “Abyan, Al-Houta, and Hadhramaut” by al-Qaeda. When al-Qaeda occupied Hadhramaut, the Houthis backed by Iranian regime not only did not confront it..., but also reduced pressure on al-Qaeda by storming our forces. However, when our forces freed these cities, the Houthis fought with full forces against us in the cities,” Mansur Hadi said.

He once again warned about the Iranian regime's expansionism in the region and their threat to unsafe shipping activities in international waters from the Strait of Hormuz to Bab-el-Mandeb by their agents in the region.