Yemeni President: We Understand the Danger of Iran Regime in the Region 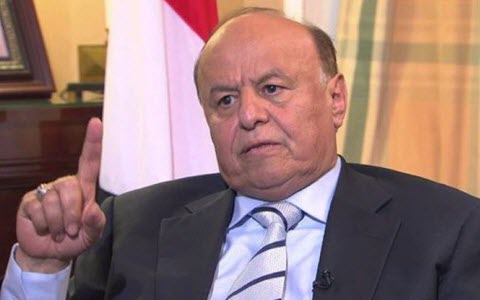 NCRI - The President of Yemen, Abdrabbuh Mansur Hadi stresses that the Houthis' obedience to Iran regime is a critical issue for Yemem. He intends to control the Houthi militias on the Strait of Bab-el-Mandeb. On Monday, September 11, the Yemeni President in an interview with Alquds Alarabi Newspaper stated that the Houthi militias violate their agreement with the Yemeni government as they receive orders from Tehran. We understand the danger of Iran regime as well as its involvements in the region.

The Yemeni President referred to his meetings with Saudi leaders in 2012 stipulating that, "I explained to the Saudi brothers that the Iran regime does not want the success of the Riyadh Diplomacy in finding a peaceful solution to Yemen. The regime does not want the national negotiations to result. The Iran regime intends to warmonger for two reasons. First, it intends to insecure Yemen as the neighboring country with Saudi Arabia and second, the Iran regime wants to take control of Mecca and Medina for its strategic objectives."

Yemeni President talked of the relationship between the Houthis and the Iran regime claiming that their ideological and organizational ties are so close. "As soon as we wanted to reach a deal with Houthis, the Iran regime orders them to violate the agreement.", claimed Abdrabbuh Mansur Hadi.

Abdrabbuh Mansur Hadi also referred to the change of the U.S. policy in Yemen and towards the Iran regime, "The U.S. government intends to target the interests of the Iran regime in support of the military solution because the Americans believe that the end of Iran regime's plan in Yemen is the decline of an empire in the region as well. The U.S. President, Donald Trump told me at the Riyadh Summit that they would agree on the objective to fight against al-Qaeda, ISIS, Houthis, and the Iran regime. Trump's stance was much better than Obama's since the former U.S. President sought to climb down over Houthis so that they conclude a nuclear deal with the Iran regime."