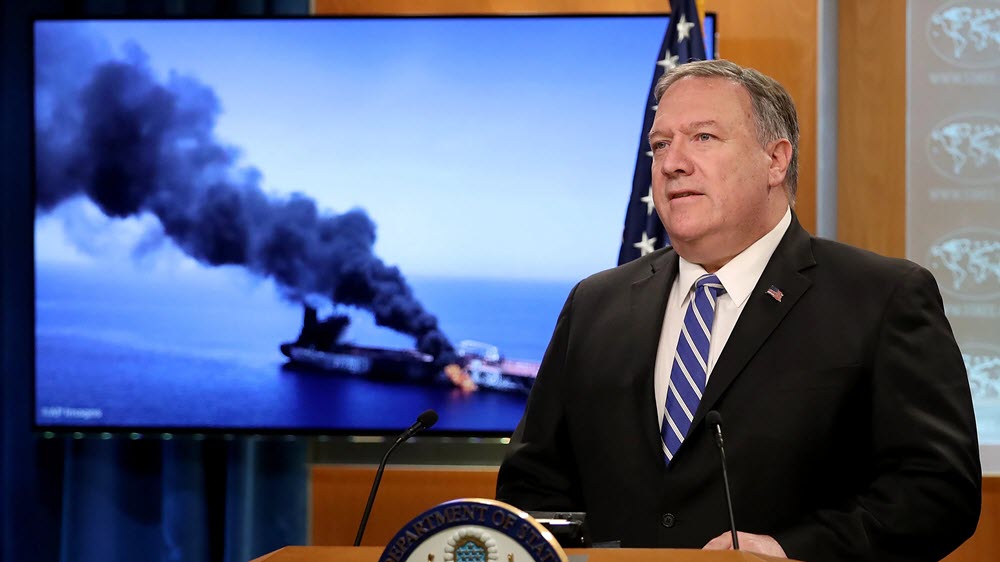 US Secretary of State Mike Pompeo has blamed the Iranian regime for the Thursday attacks on two oil tankers located in a strategic sea-lane near the Iranian coast, in which one tanker was set on fire, sending thick black smoke into the air.

Pompeo said: "It is the assessment of the United States government that the Islamic Republic of Iran is responsible for the attacks that occurred in the Gulf of Oman today. This assessment is based on intelligence, the weapons used, the level of expertise needed to execute the operation, recent similar Iranian attacks on shipping and the fact that no proxy group operating in the area has the resources and proficiency to act with such a high degree of sophistication."

One US defence official, who spoke on the condition of anonymity, said that the US had "a lot of indications" that Iran was responsible and that the US was “confident” of the Regime’s involvement, citing evidence that the official was not able to elaborate on.

The US Navy's Fifth Fleet, based in Bahrain, received distress calls from the Japanese and Norwegian tankers about an hour apart.

The USS Bainbridge guided missile destroyer provided immediate assistance to the Japanese vessel, according to Lt. Col. Earl Brown, the representative for US Central Command, who confirmed that all 21 mariners from that ship had been rescued and were currently aboard the US vessel.

However, the Norwegian ship was taken over by the Iranian regime, with the state-run Iranian news reporting that they’d rescued the 44 crewmembers and a US defence official saying that the crew are being held in Iranian custody.

These attacks have been roundly condemned in the US, with Jonathan Cohen, the American Ambassador to the United Nations, telling the Security Council that it was "unacceptable" for anyone to attack commercial shipping and that the attack raised "very serious concerns".

Meanwhile, Pompeo said that the Iranian regime insulted Japan by attacking its ship while Prime Minister Shinzo Abe was in Iran.

There have been no immediate explanations about the type of weapon that damaged the vessels.

This is the latest attack in the region that the US has blamed on Tehran.

In May, the US said that Iran’s regime used mines to attack four oil tankers off the coast of the United Arab Emirates, with Navy Rear Adm. Michael Gilday specifically blaming the Islamic Revolutionary Guard Corps (IRGC), which had recently been designated a terrorist group by the US. Gilday also said that the Iranian regime’s “proxy” forces launched a rocket attack in Baghdad’s Green Zone and an attack against a Saudi oil pipeline.