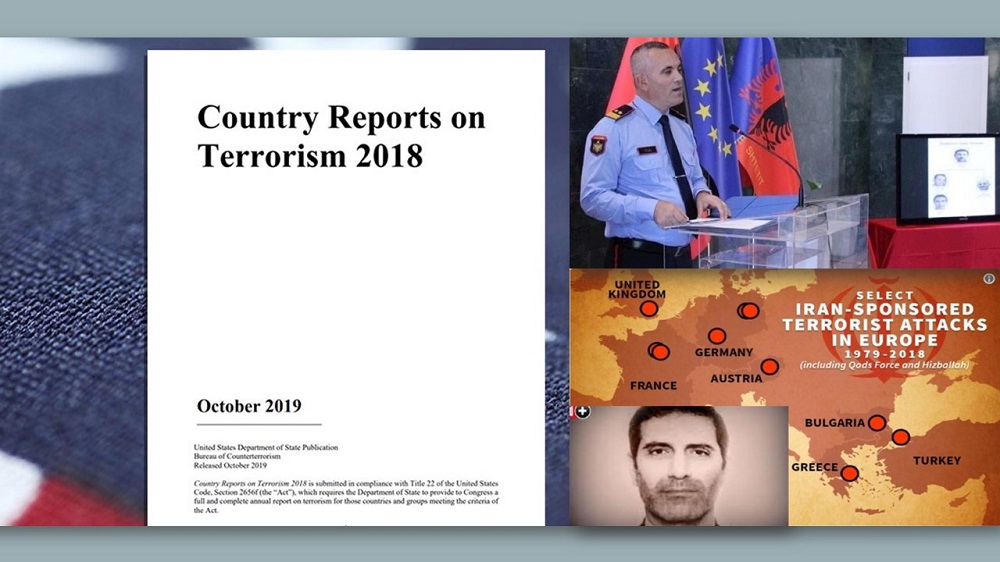 Written by Mahmoud Hakamian on 02 November 2019.

"Iran remains the world’s worst state sponsor of terrorism." That's according to the Country Reports on Terrorism 2018 released by the United States Department of State on Friday, November 1, 2019.

"The regime has spent nearly one billion dollars per year to support terrorist groups that serve as its proxies and expand its malign influence across the globe," the State Department's annual report said.

"It also has engaged in its own terrorist plotting around the world, particularly in Europe. In January, German authorities investigated 10 suspected Islamic Revolutionary Guard Corps Qods Force operatives."

"In the summer, authorities in Belgium, France, and Germany thwarted an Iranian plot to bomb a political rally near Paris, France," the report added, referring to the regime's attempt to bomb the annual 'Free Iran' gathering in June 2018 attended by Iranian opposition leader Maryam Rajavi and hundreds of international lawmakers and personalities as well as tens of thousands of supporters of the Iranian democratic opposition.

"On June 30, French and Belgian authorities arrested several individuals – including an Iranian official based in Austria – suspected of planning to attack an event organized by the Mujahedin-e-Khalq in Villepinte. In October, France imposed sanctions on two Iranian operatives and the internal directorate of the Iranian intelligence agency (MOIS) in connection with the covert terrorist plot," the report noted.

"On October 9, German authorities extradited Iranian official Assadollah Assadi to Belgium, following a legal battle in which he unsuccessfully claimed diplomatic status following his June 30 arrest while on what he claimed was personal travel in Germany. Assadi was arrested in Germany pursuant to a European arrest warrant alleging espionage and a covert plot to attack Iranian opposition activists at a rally in France."

"In October, an Iranian operative was arrested for planning an assassination in Denmark, and in December, Albania expelled two Iranian officials for plotting terrorist attacks," the report said, the latter case referring to the regime's attempt to bomb the Persian New Year festival organized at the compound of the main Iranian opposition group People's Mojahedin Organization of Iran (PMOI), or Mujahedin-e-Khalq (MEK), in Albania.

ICYMI @USEmbassyTirana: "Iran has exploited its diplomatic presence in Tirana to scheme for the destruction of its political opponents, seeking to answer reasoned arguments w/ the cowardice of hidden detonators. Albania has shown it won't tolerate Iranian terrorists on its soil." pic.twitter.com/XqgMCveKUu

"In December, Albania expelled two Iranian officials, including the Iranian Ambassador to Albania, in response to an Iran-sponsored plot to carry out a terrorist attack in Albania," read another passage in the report.