The Bipartisan Call by Members of U.S. Congress for Freedom in Iran 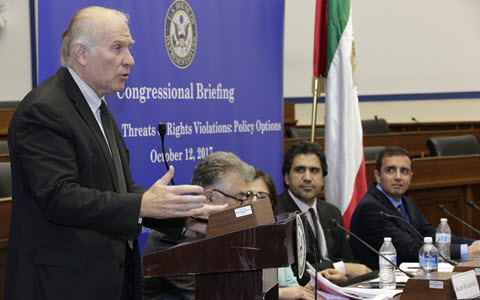 US Democrats and Republicans call for a free Iran
It is hard to find a topic on which Democrats and Republicans in the US Senate and Congress agree, yet both parties have recently shown support for a firm policy toward Tehran. In a crucial bipartisan briefing, senior members of Congress called for a free Iran. Dr. Majid Rafizadeh a Harvard-educated, Iranian-American political scientist wrote in his article on ‘Arab News’ on October 19.

The article continues as follows:

Democrat Steve Cohen urged the US administration to help the Iranian people and promote their cause. “Let’s work to see that Iran is free and that the situation changes internally,” he said. Republican Steve Chabot said the US “must work with Iranian people to help them bring freedom in Iran.”

One of the reasons both parties agree on countering Tehran is that it has carried out anti-American and interventionist policies since the establishment of the Islamic Republic in 1979. Its attitude has not changed. House Middle East Subcommittee Chair Ileana Ros-Lehtinen said: “A democratic, free Iran is in the best interest of the US and the world.”

Any astute observer would contend that Tehran has become increasingly hardline, belligerent and aggressive since 1979. It hardly had any regional influence at that time, but now its footprints and interventions are in almost every country in the Middle East, and even extend to Latin America.

Tehran is the epicenter of regional instability and conflicts. If it is not countered efficiently, its influence will continue to expand. The international community must act before it is too late. As House Foreign Affairs Committee member Tom Garrett warned: “The current approach to Iran’s regime is dauntingly familiar to the world’s approach to (1930s) Germany — one of appeasement.”

At the congressional briefing, I shed light on Tehran’s domestic and foreign policies, including its human rights violations and belligerent role in the region. When asked what would be the most effective policy to counter Tehran, I replied that promoting freedom in Iran does not mean going to war with it.
The best policy the US and other governments can pursue is one of firmness, decisiveness, and recognition of the rights of the Iranian people to democracy and human rights. A comprehensive strategy should address Iran’s nuclear deal, ballistic missile program, human rights, regional interventions and hegemonic ambitions.

Congress ought to push for tougher enforcement of the International Atomic Energy Agency’s (IAEA) inspections of Iran’s nuclear sites, specifically its military sites. The sunset clause that removes restrictions on Iran’s nuclear programs after the deal expires should be removed. IAEA inspectors should be joined by a team of experts from the countries that negotiated the deal: The US, UK, France, Russia, China and Germany.

The weaponization dimension of Iran’s nuclear program, about which the deal says nothing except for one small section, should be addressed. Currently, there is no enforcement or monitoring mechanism regarding the weaponization dimension. Congress should only consider US national security interests and those of its regional allies when reviewing any bill related to Iran.

For decades, the survival and raison d’etre of Iran’s ruling clerics have rested on projecting the US as the “Great Satan” and the region’s No. 1 enemy. They have scuttled US foreign policy objectives in the region, creating chaos, intervening in Arab countries, harming American national security interests and promoting anti-Americanism.

Since Jimmy Carter, several US presidents have tried, unsuccessfully, to change Iran’s behavior via appeasement. The ball is now in Congress’ court to take the lead in confronting Tehran.

Fortunately, the bipartisan call by members of Congress for freedom in Iran shows that the tide is turning significantly against Tehran, and in support of the honorable, just and nonpartisan cause of promoting regional stability, peace, freedom, the rule of law and social justice.