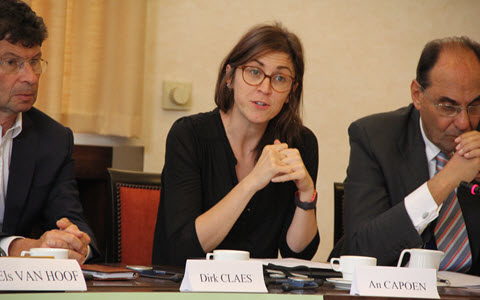 Several members of parliament and senators from different political parties spoke in this meeting which was chaired by Ms Els Van Hoof, member of the Foreign Affairs Committee of Belgian Parliament from the Christian Democratic Party.

The following is the full text of the speech, delivered by Ms. An Capoen, member of foreign affairs committee of Belgian parliament.

As everyone else in this room today, I am deeply worried about the continuous human rights violations in Iran. We are now at the beginning of the 2nd term of Rouhani as president. He again became president after an unopposed election, which at least brings some questions. Even though Rouhani is considered a moderate in the West it is a fact that his first term more than 3000 people were hanged. This makes Iran the highest number of executions in the world, per capita.

So this means the current regime is not much different from the one 30 years ago even though we in the West consider them to have a more moderate appearance.

That is why I am confused and very frustrated, about the way Mrs Mogherini is dealing with Iran. She encourages people to invest in Iran and in the meantime remains silent about the human rights violations and repression of women in Iran. This silence by EU’s foreign policy chief, is extremely damaging for the reputation of Europe and is in the benefit of the theocratic state of the mullahs who become encouraged to carry on their repressive rule.

As you have heard the main tool of repression in Iran is the IRGC or the Islamic Revolutionary Guards Corps. They control most of the Iranian economy too. Last week IRGC was added to the list of terrorist organizations by the US Treasury. This means that European companies who want to do business with Iran take the risk of being sanctioned by the US government because they may be directly or indirectly making a deal with IRGC which is blacklisted by USA. These new events lead us to new relations with Iran, so it should make us think as not to invest on this regime.

As the policy makers in the EU we should note that regime in Tehran cannot and will never be a partner for us as it continues to violate basic human rights. The message today is contingenting the relations with Iran to halting the executions.

Like everyone else I had the opportunity to have a personal meeting with Mrs Maryam Rajavi when she was in Brussels last December. I consider her to be a very inspirational leader. I think she is the symbol of anti-fundamentalism today as she seeks women’s rights and separation of religion and state. So I think we should all support her in this campaign for a free Iran.

Previous articleIran Regime Will Not Last Long
Next articleConference in the Senate of Italy, Call for Justice Over the 1988 Massacre of Political Prisoners in Iran