The Wave of Impeachment, Indicative of a Dead-End for Iran Regime 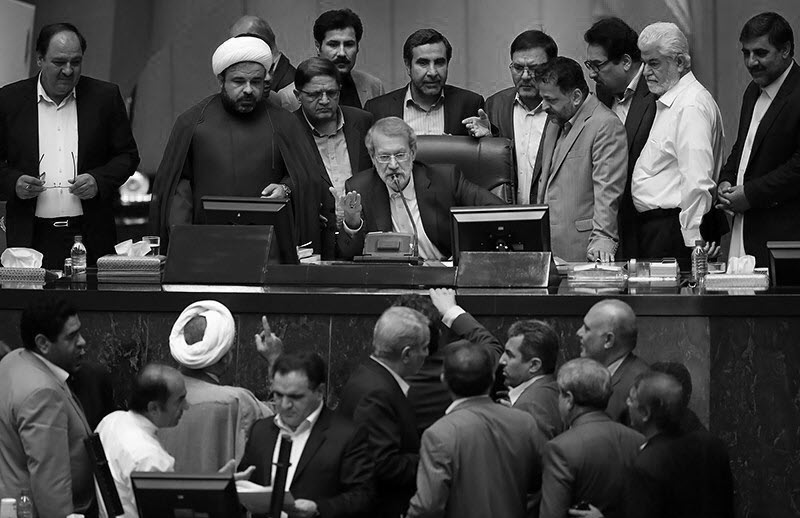 Masoud Karbasian, is the second Cabinet Minister of Rouhani’s government, who the parliament is going to sack by next month.

Around 3 weeks ago, the Minister of Work named Ali Rabi-ee was also dismissed.

By September 11th, the Ministers of Industry and Education are also going to be Impeached.

Following months of conflict between different parties (over their fights for power in government), President Hassan Rouhani himself was also asked to address some questions regarding the country’s economy (August 28th). To which he responded: “Economic issues are of determinative nature. However, what’s more important now is that many people have lost their faith in the future of our Islamic Republic and are doubting its power”.

Recently, many government officials are beginning to admit that the root of all problems is in the systematic corruption of the regime over its 40 years of governance, rather than in the sanctions of the United States.

According to a parliamentarian named Qasem Mirzaei Nikou: “The fraudulent ways of money-making runs in all branches of the government. Their corruption is endless, much like a seven-headed dragon…”

Rather than being influenced by legal policies, Iran’s economy is mainly shaped by corruption, bribing, and rent-seeking; none of which will ever be eliminated with mere Impeachments.

Even parliamentarians themselves acknowledge the fact that the issues at hand are much more complex than just replacing a few, or even all, of the cabinet members.

In a recent meeting held on August 26th, Elias Hazrati commented in this regard: “We are in the month of August now. Sanctions won’t start until November, and its consequences won’t be revealed any earlier than the next 6 to 12 months. So, the current inflation of 19%, which is expected to go up to 40% by the end of the year, has clearly nothing to do with the United states”.

Another reformist from the parliament, named Mohammad Reza Badamchi, adds: “In our today’s society, 1 out of every 6 people are unemployed. In other words, close to 20 million of our youth, aged between 15 to 29 years old, have no jobs now” (August 29th, 2018; ISNA).

As we can see, the issues of our country, such as unemployment, run so deep that moving around a few ministers won’t make any difference at all.

On the other hand, it must be noted that only up to 50% of the country’s economy is controlled by the cabinet. The rest is in the hands of the Supreme Leader Ali Khamenei, as well as his subset organisations which are mostly in affiliation with the Revolutionary Guards.

The former head of the Central Bank and parliamentarian, Mahmoud Bahmani, said last month that: “A 2-year-worth of currency, accumulated from our exports, haven’t been returned to our country just yet. The bank accounts of the officials’ families are worth more than our currency held overseas. In March 2013, the liquidity rate was 435 thousand billion Toman, whereas today, it is more than 700 thousand billion Toman”.

What do Iranian people want now?

Even though many government officials continue to blame their opponents for today’s mess, people blame no one but the government itself. Which is evident in the witnessed chains of street protests, in which many are heard chanting “death to Khamenei”, “Khamenei you should be ashamed of yourself”, and “Reformists, Hardliners, Game is Over”.

People have made it clear over and over, that what they really want is the subversion of this regime, which they hold accountable for all their crises.

The main problem of the regime is not just its economy or its interpellations, but rather, the large crowds of our brave protestors.

Which Rouhani himself acknowledges in one of his earlier statements: “How did our country’s atmosphere suddenly change? It changed since December 26th, 2017; anyone who claims otherwise is only misleading people, in my opinion”.

The truth is, the Iranian Regime fears its protestors, because it fears its overthrown. The recent wave of Impeachments is just a reminder of how weak the regime has become.
With the exacerbation of many issues and the ongoing expansion of protests, this regime can no longer escape people’s hatred and anger towards themselves, and their soon to come overthrown is therefore inevitable!