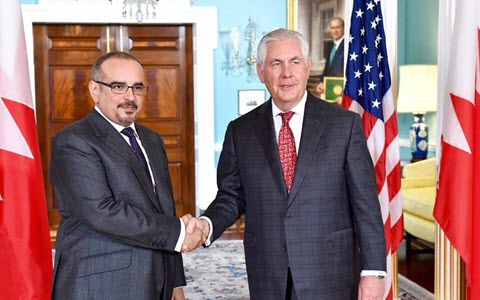 NCRI – US Secretary of State Rex Tillerson met with the Crown Prince of Bahrain, on Wednesday, to discuss how to counter the Iranian Regime’s malign influence on the Middle East.

Bahrain recently blames the Iranian Regime following a terrorist attack that caused an explosion at an oil pipeline. Bahrain’s Interior Minister Rashid bin Abdullah Al Khalifa said that this was an attempt to destabilize the kingdom, which is a close ally of Saudi Arabia.

A statement by the Interior Ministry said: “This is the latest example of a terrorist act performed by terrorists in direct contact with, and under instruction from, Iran… Evidence gathered during the investigation confirmed that this was an act of terrorism designed to undermine the security of the Kingdom and its citizens. A further investigation is currently underway to identify the perpetrators and to bring them to justice.”

Iran has previously instigated protests against the royal family and funded terrorist groups, like Hezbollah, to act in Bahrain.

This is not unusual behaviour for the Regime; they do this all across the Middle East in an attempt to destabilise foreign countries and seize power.

Bahrain cut off all ties with Iran in 2016 and joined the Arab blockade of Qatar, a key Iranian ally, earlier this year.

In a statement, the State Department emphasized how grateful Tillerson was to Crown Prince Salman for Bahrain’s strong partnership with the US.

Prince Salman also met with the secretary of defence James Mattis to sign an enhanced Defence Cooperation Agreement (DCA), which has been in place since 1991. Defence ties between the US and Bahrain, where the US Navy’s Fifth Fleet is stationed, have improved under the Donald Trump administration.

Crown Prince Salman is due to meet with Trump and vice president Mike Pence later today. This is the highest-level visit of a Bahraini delegation since Trump took office.

However, this is more than the traditional diplomatic meetings, according to Karen Young, a senior resident scholar at the Arab Gulf States Institute in Washington.

She said: “The delegating in Washington now is seeking US support for efforts in order to tackle the larger political reforms that will be necessary for national reconciliation. Bahrain is an important bellwether of reforms moving forward in the Gulf Cooperation Council.”

The United Stated activated the snapback mechanism that was a proviso of the 2015 Iran nuclear deal last Saturday. Now the question is that...
Read more