Trump, Merkel Amiable, but No Obvious Movement on Iran 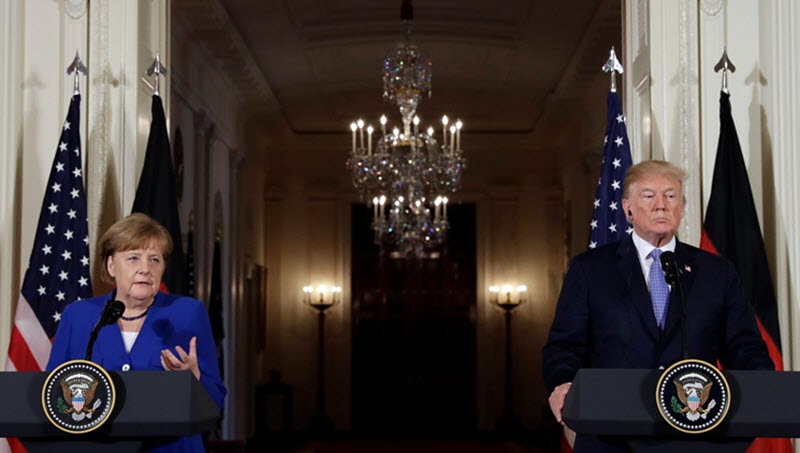 Facing looming deadlines, President Donald Trump and German Chancellor Angela Merkel largely papered over their differences on trade and the Iran nuclear accord on Friday, stressing instead ties between the longtime allies and their shared goal of a nuclear-free North Korea.

Trump and Merkel’s three-hour visit at the White House contained little of the back-slapping cordiality that defined Macron’s three-day trip, including a state dinner.

Trump is widely expected to withdraw the U.S. from the international Iran agreement next month, despite pleas from Macron earlier in the week and Merkel on Friday. Yet Merkel used her public comments after her meeting with Trump to try to gloss over that disagreement, calling the Obama-era accord a “first step” toward curtailing and containing Iran’s regional ambitions and suggesting openness to a side agreement.

Trump has said he, too, is open to new negotiations with Iran. But he has not said he will regard European calls for the U.S. to stay in the deal, which aims to restrict Iran’s nuclear efforts, while any further talks are underway. His decision on whether to exit the deal is expected by May 12 and he forcefully set out what he sees as the ultimate goal.

“They’re not going to be doing nuclear weapons. You can bank on it,” Trump declared at a news conference with Merkel.

“The decision lies with the president,” she said.

German officials had signaled that their goals for Friday’s visit were modest,

Merkel made a point on one issue, declaring that the U.S. pressure campaign against North Korea deserved the lion’s share of the credit for the historic summit between the leaders of North and South Korea. Trump praised Germany’s role in the effort but agreed with a reporter’s question that he would be “the closer” in the deal, saying “I think I have a responsibility” to oversee denuclearization of the Korean peninsula.

Although Germany is unlikely to accept a wholesale rewrite of the Iran deal, Berlin has indicated that it is prepared to consider add-ons that would crack down on Tehran’s ballistic missile program and curb Iranian efforts to strengthen its strategic role in the Middle East.