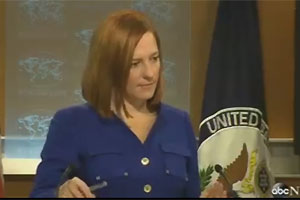 The US has voiced concerns about the Iranian regime’s missile program after Tehran announced the launch of a satellite into orbit.

“As we’ve said before, Iran’s missile program continues to pose a dangerous threat to the region and is an issue we monitor closely,” State Department spokeswoman Jen Psaki said.

“And our long-standing concerns regarding Iran’s missile development efforts are shared by the international community, which has passed a series of UN Security Council resolutions focused on Iran’s proliferation-sensitive activities.”

“That issue has been discussed and will continue to be discussed as part of the negotiations,” Psaki said.

In response to the statements by US State Department spokesperson, Abbas Araghchi, member of the negotiating team in the nuclear talks said the regime’s ‘defense capabilities are not subject to any type of negotiations.’

Araghchi claimed Fajr satellite was put into orbit on February 2, 2015, to strengthen ‘communication and information infrastructures of the country.’

Meanwhile, information about the successful launch of the satellite “Fajr” has not been confirmed by the US Space Surveillance system, according to a report.

According to the space monitoring system, only objects related to the launch of a Japanese spy satellite, which received numbers 40381, 40382 and 40383 in a US catalogue of space objects, went into orbit.

A court in Antwerp, Belgium, is set to announce its verdict regarding Iran's diplomat-terrorist Assadollah Assadi and his three accomplices for their foiled attempt...
Read more
Latest News on Iranian Terrorism

Days before a court in Antwerp, Belgium is to announce its verdict about Iran’s incarcerated diplomat-terrorist Assadollah Assadi on February 4, the regime’s Ministry...
Read more
Iran Opposition & Resistance

Iran: Have the West Been Naïve in Dealing With Iranian Influence Activities?

It was recently revealed that the US government was pursuing charges against a political scientist and self-styled foreign relations expert named Kaveh Lotfolah Afrasiabi,...
Read more