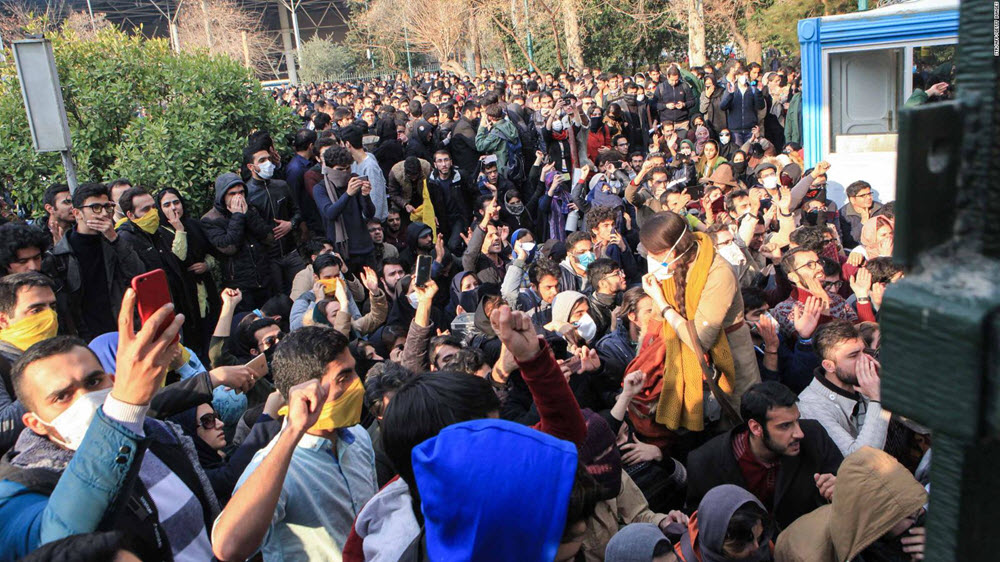 The people of Iran began to protest at the end of 2017. They have been calling the regime out on its corrupt policies and its meddling and interference in other nations. They have repeatedly called on the Iranian regime to concentrate on domestic issues rather than fuelling and sparking conflicts abroad, in particular in Syria and Gaza.

Protests are continuing to his day and the people have made sure the regime knows that they will continue until the regime collapses.

The people know that the regime’s corruption has caused great economic uncertainty, and this is one of the reasons behind the protests – especially at the beginning.

However, the economic issues are nothing compared to the political motivations of the protests and anti-government demonstrations. The clerical regime’s violent and misogynistic rule is what is staying at the forefront of the people’s concerns and they have been heard chanting “death to the dictator”. They have also pointed out that America is not the enemy of Iran – it is the regime itself.

As well as denouncing the regime for its meddling abroad, they are also calling it out for its suppression at home that has seen tens of thousands of Iranians executed over the years, simply for opposing the brutal rule of the mullahs.

Iran’s interference abroad is something that is devastating the region as the regime tries to gain control over large areas so that it can construct its corridor of military and political control the whole way across the Middle East to the Mediterranean Sea. It has plundered billions of dollars on its efforts and it heavily finances the terrorist Hezbollah group to do so.

These billions could have gone a long way in improving the lives of the people at home. The regime has proven time and time again that its regional exploits take precedence over the Iranian people.

To a large part, how the United States proceeds with its policies toward Iran will be determining in the future of Iran. Already, the current administration under Trump has made the situation progress more than that of the previous administration, but there is still a lot more to be done. Sanctions have been a good start, but it is far from being enough.

Trump has vowed to exert maximum pressure on the regime, but it still has to put an end to Iran’s aggressive policies abroad. It also crucially needs to truly stand behind the people of Iran. The U.S. has the possibility of intensifying the anti-government movement in Iran by questioning the regime’s regional activities. And the U.S. has the clout to persuade its allies in the region to join its efforts.

The main opposition to the Iranian regime has called on the United States to do so, saying that international support is necessary. However, it very firmly advises that military action should not be a consequence. The people of Iran are the force behind eventual regime change and military action would make the situation worse because it will just mean more Iranian money is poured into conflicts.