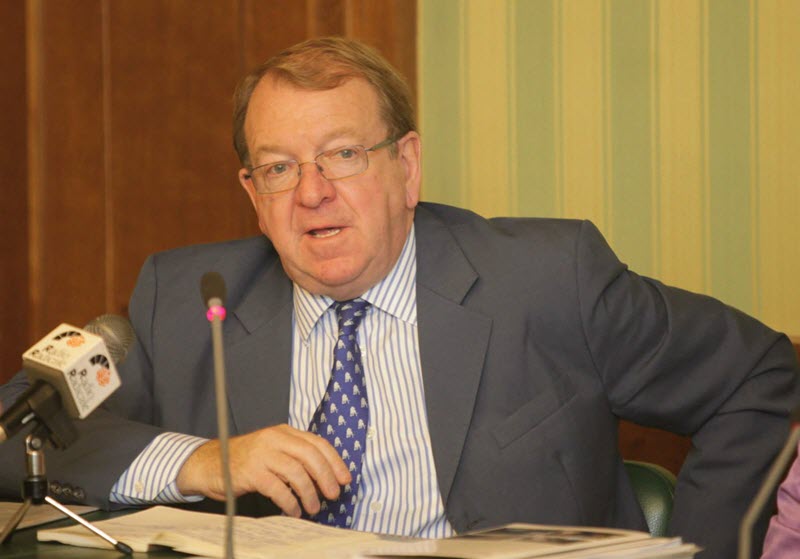 In an op-ed for United Press International on May 10, Stevenson points out: “Despite the Iranian president’s previous assurance that his country was “immunized against U.S. sanctions,” the plummeting economy and the collapse of the rial, the Iranian currency, combined with the nationwide protests by striking workers that have continued for the past 16 months, are a clear sign of a failed government that is now desperately searching for help.”

“Secondly, the threat to resume enriching uranium exposes the truth behind Iran’s nuclear program and shows clearly that it was never designed for peaceful purposes, but was always aimed at the production of nuclear weapons.”

Stevenson adds that in 2002, “the National Council of Resistance in Iran, the main democratic opposition to the regime, revealed concrete intelligence that proved Iran was enriching uranium to a level compatible with the construction of nuclear weapons. It was also developing advanced missile delivery systems that could be used for this purpose. The revelation sent shock waves around the world.”

Stevenson argues that the 2015 nuclear deal (JCPOA) was a flagrant act of appeasement by the Obama administration and European powers, lifting sanctions on the regime and releasing over $150 billion in frozen assets. Ludicrously, that deal even “agreed to a demand that military sites inside Iran would be exempted from routine inspections by the International Atomic Energy Agency, despite intelligence that indicated much of the nuclear weapons and missile program was being developed in these top-secret military sites.”

“The JCPOA provided a windfall for the theocratic dictatorship, whose biggest export is terror, enabling it to arm its foreign allies and proxies such as Bashar al-Assad in Syria, the Houthi rebels in Yemen, the brutal Shi’ia militias in Iraq and the terrorist Hezbollah in Lebanon.”

Donald Trump decried the nuclear deal with Iran as “the worst deal ever” during his presidential campaign and vowed the United States would withdraw from it. As president, he fulfilled that election pledge, restored tough sanctions and last month even listed Iran’s Islamic Revolutionary Guards Corps as a foreign terrorist organization. The IRGC, which is the equivalent of the regime’s Gestapo, controls most of the Iranian economy, so its blacklisting by the Americans makes it virtually impossible for Western businesses to trade with Iran.

But Rouhani’s protests also lay bare the lies and duplicity of a regime that pleads for economic help while its embassies in Europe are used as bomb factories and cells for plotting assassinations and terror attacks on European soil. The arrest of Iranian agents in Europe who were planning assassinations and terror attacks on members of the Iranian opposition are evidence of this regime’s malign intentions.

The diplomat, Assadollah Assadi, was a leading Ministry of Intelligence and Security agent, posing as a member of the diplomatic staff in the Iranian Embassy in Vienna. He allegedly handed over a bomb to three other Iranian agents with instructions that they should attack the NCRI rally taking place in Paris in June, attended by over 100,000 men, women and children. A similar bomb plot in Albania against the opposition, the People’s Mojahedin of Iran (MEK/PMOI), was thwarted by the police and led to the expulsion of the Iranian ambassador and his first secretary from the Iranian Embassy in Tirana.

A regime that sends its diplomatic staff to kill and maim innocent civilians in Europe has removed itself from the norms of civilized behavior. Rouhani’s protests should be treated with the scorn that they deserve. The United Kingdom, France and Germany should follow America’s example — withdraw from the nuclear deal and impose tough sanctions on this rotten dictatorship, hastening its impending demise.

Struan Stevenson is the coordinator of the Campaign for Iran Change. He was a member of the European Parliament representing Scotland (1999-2014), president of the Parliament’s Delegation for Relations with Iraq (2009-14) and chairman of the Friends of a Free Iran Intergroup (2004-14). He is an international lecturer on the Middle East and is also president of the European Iraqi Freedom Association.