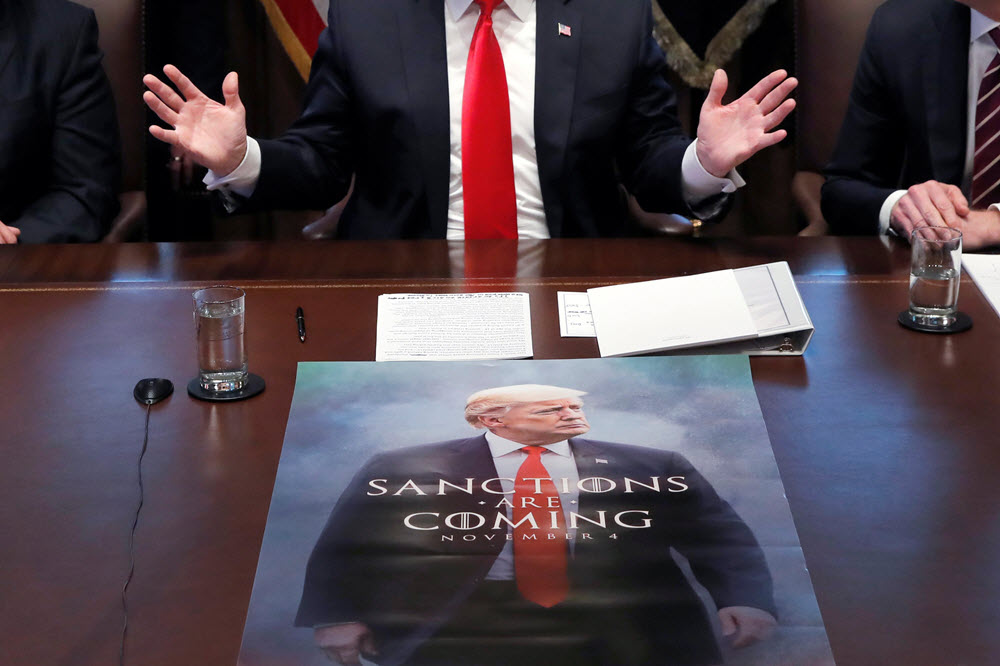 U.S. President Donald Trump announced last year that the United States was exiting the Joint Comprehensive Plan of Action (JCPOA), or the 2015 Iran nuclear deal as it is known. To justify his decision, he explained that the Iranian regime’s belligerence was too great to ignore. It has continued to spread chaos across the region, providing extensive support and funding to proxy groups and militias and plotting terrorist activities.

President Trump also spoke about the Iranian regime’s domestic abuses, mainly the outright denial of human rights and its ballistic missile program. The U.S. State Department announced that it would be expecting all countries to stop importing Iranian oil. Most countries complied within the timeframe provided, while the biggest importers were given extra time – albeit it with strict conditions.

The purpose of the oil restrictions is to cut the Iranian regime off from the funding that it uses to support malign groups. And it appears that the strategy is working as planned.

The Lebanese Hezbollah group has been supported by the Iranian regime for years. Iran has always given it a huge budget in order to operate, but now it appears that the terrorist group is struggling.

Hezbollah has been receiving around $700 million per year from Iran but this has significantly decreased because of the U.S. sanctions. For the past few months, Hezbollah’s fighters have seen a drastic cut in their salary. It is estimated that these fighters once got between $800 and $1,200 per month. The reserve fighters are now getting around $400 per month – half of what they used to get.

The Iranian regime had been funding social institutions such as medical and leisure facilities and schools in Lebanon that were specifically for Hezbollah members and their families, but many of these have now been closed down because the funding has stopped. Hezbollah members have also been asked to leave housing that was funded by Iran, also due to non-payment.

The families of Hezbollah fighters have also seen their benefits reduced. Furthermore, Hezbollah fighters that have served for more than 25 years have been entitled to a pension of $600 per month. They are now receiving nothing. In order to prevent mutiny, they have been told to carry out administrative duties to receive their monthly allowance.
Hezbollah’s operations are starting to be significantly hindered and it has taken to the people of Lebanon to ask for funds. This fundraising effort is currently bringing in just less than $1,500 per day but donations from the business sector are significantly larger.

This is proof that the U.S. sanctions are working as they were intended. The whole point was to decrease the Iranian regime’s ability to carry out malign activities, including those that are done via proxy groups and militias.

The United Kingdom recently designated the whole of the Hezbollah group as a terrorist organisation and there is hope that many more countries will continue to target Iran-backed groups in the same way, especially Iran’s own IRGC and intelligence ministry.

Iran is among the wealthiest countries globally in terms of natural resources such as oil and gas. Iran has 18% of the world’s natural...
Read more
Iran Protests & Demonstrations

With Iran’s increasing economic crisis due to the regime’s mismanagement, state-run media warn of another public outburst against the entire regime. “in the current ...
Read more