U.S. Warns Iran Regime: ‘The World Will Be Watching You’ 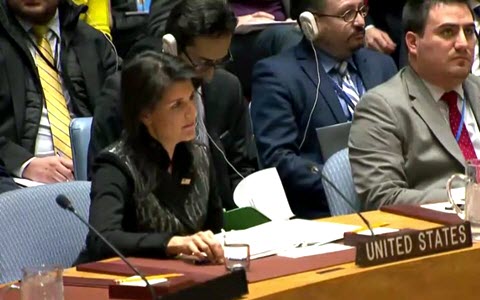 US Ambassador Nikki Haley says “the Iranian regime is now on notice: the world will be watching what you do,” during an emergency meeting of UN Security Council on mass anti-government protests in Iran.

US Ambassador Nikki Haley warned Iranian authorities on Friday that the world is watching, as thousands held pro-government demonstrations in Iran following anti-government protests, in which over 21 people were killed.

“The Iranian regime is now on notice: the world will be watching what you do,” Haley told an emergency meeting of the UN Security Council on the situation in Iran.

The US called the meeting despite fierce criticism from Russia, which accused Washington of interfering in Iran’s internal affairs.

“The Iranian people are rising up in over 79 locations throughout the country,” Haley told the council.

Besides 21 deaths, hundreds have been arrested since December 28 as protests over economic woes turned against the Iranian government, with attacks on government buildings and police stations.

TRT World’s Frank Ucciardo, who is in New York, said it is difficult for the US to achieve anything from the UNSC emergency session as Russia and China aren’t favoring the move against Iran.

Earlier, diplomats had expected Russia to call a procedural vote to try to block the meeting, but in the end, Moscow’s envoy did not make that request.

Heading into the council chamber, Haley gave reporters a thumbs-up and answered “yes” when asked if she had the nine votes needed for Friday’s meeting to go ahead.

Over the past days, US has lobbied hard to win support for the Security Council meeting, especially from the six new non-permanent council members, diplomats said.