UN chief: No improvement in human rights in Iran under Rouhani 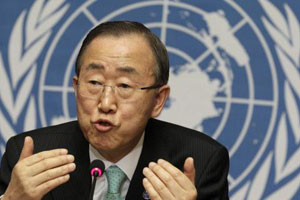 NCRI – United Nations Secretary-General Ban Ki-moon has criticized Iran’s regime for gross violations of human rights in a report to the 70th session of the UN General Assembly.

Concurrent with the presence of the regime’s President Hassan Rouhani in New York, the UN chief referred to numerous human rights violations in Iran in the past year in his annual report to the General Assembly on Friday, September 25.

In response to the Iranian regime’s argument that executions are a preventive measure against drug trafficking, the report asserts: “Given the steady upward trend in the number of executions in recent years, the Secretary-General questions the effectiveness of the death penalty as a deterrent and urges the Islamic Republic of Iran to seek alternative solutions that comply with international human rights law and standards.”

“The Human Rights Committee, which monitors the implementation of the International Covenant on Civil and Political Rights, to which the Islamic Republic of Iran has been a State party since 1975, has repeatedly stressed that capital punishment for drug-related offences does not comply with the ‘most serious crimes’ requirement under article 6 of the Covenant, which international human rights jurisprudence has defined as murder or intentional killing.”

“That interpretation has been reiterated by the Secretary-General, the United Nations High Commissioner for Human Rights and the Special Rapporteur on extrajudicial, summary or arbitrary executions, who have also stressed that drug-related offences that do not involve intentional killing do not meet that threshold.”

“The United Nations Office on Drugs and Crime has also consistently expressed concern about drug-related offences being qualified as the ‘most serious crimes’ in its high-level talks with senior Iranian officials … The Secretary-General is concerned that capital punishment is used for crimes that do not meet that threshold.”

Secretary Ban noted that Tehran has failed to make publicly available “official data on children in conflict with the law, in particular those at risk of execution”

Secretary Ban stated that public executions in Iran have a “dehumanizing effect.”

The report also referred to flagrant cases of violation of women’s rights. “More than 2.9 million women reportedly received a warning for failure to observe the [dress] code between March 2013 and March 2014.”

It also highlighted state censorship and imposition of limitations on the media, internet filtering, threatening freedom of expression, pressuring of labor associations, prejudice against religious and ethnic minorities, arrest of human rights activists, and public executions.

“The Working Group on Enforced or Involuntary Disappearances has noted that it has transmitted 537 cases to the Government since its establishment and that 518 remain outstanding.”
“The Secretary-General remains deeply troubled by the increased number of executions and reiterates his call upon the Government to introduce a moratorium on the use of the death penalty and to prohibit executions of juvenile offenders in all circumstances.”

“The Secretary-General urges the Government to create space for human rights defenders, lawyers and journalists and to release political prisoners, including human rights defenders and lawyers, detained solely for legitimately exercising their rights to freedom of expression, association and peaceful assembly,” the report added.

Iran suffers from an economic crisis due to the regime’s mismanagement and wasting national wealth on terrorism. Iranian workers are among the foremost victims...
Read more
Iran Human Rights

On Monday, eight fuel porters in Iran’s southeastern province of Sistan and Baluchistan were killed by the Islamic Revolutionary Guard Corps (IRGC) after staging...
Read more