UN Experts Alarmed at Mistreatment of Detained Protesters in Iran 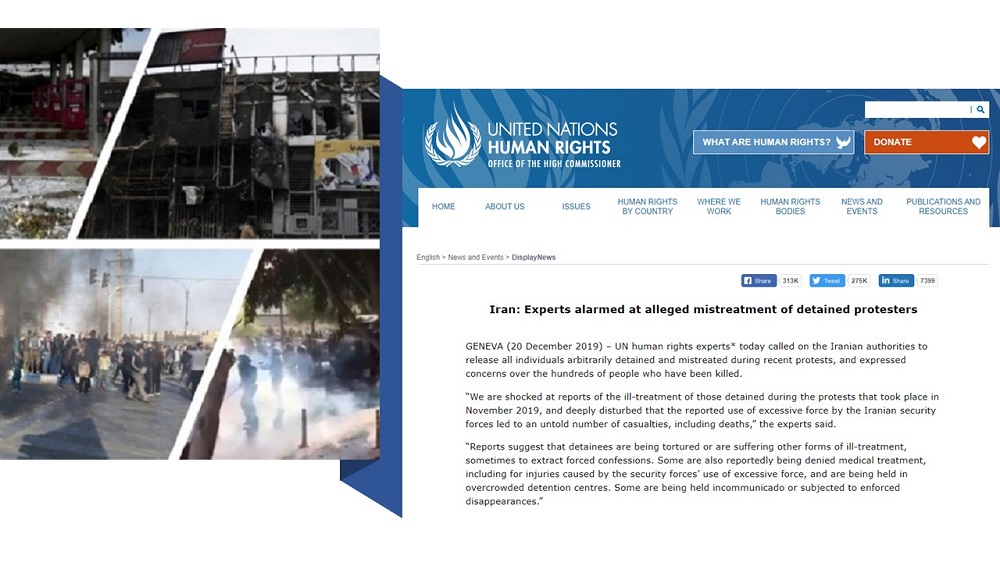 More than a dozen United Nations human rights experts on Friday called on the Iranian regime to release all individuals arbitrarily detained and mistreated during recent protests.

“We are shocked at reports of the ill-treatment of those detained during the protests that took place in November 2019, and deeply disturbed that the reported use of excessive force by the Iranian security forces led to an untold number of casualties, including deaths,” the UN experts said.

“Reports suggest that detainees are being tortured or are suffering other forms of ill-treatment, sometimes to extract forced confessions. Some are also reportedly being denied medical treatment, including for injuries caused by the security forces’ use of excessive force, and are being held in overcrowded detention centres. Some are being held incommunicado or subjected to enforced disappearances.”

Official sources state that at least 7,000 protesters were arrested, thousands of whom are still in detention, said the UN experts’ press release.

The experts also fear that detainees will be denied the right to a fair trial because of the Iranian regime’s failure to adhere to due process standards, especially for those who have voiced opposition to the Government.

“Senior officials have said that protesters will face severe punishment,” the experts said. “We have already seen Iranian state television broadcast so-called ‘confessions’, despite claims that these are being obtained under duress. Many detainees are also reportedly being denied the right to a lawyer of their choosing.

“We urge the Government and the judiciary to ensure that all those accused of crimes go through court proceedings that adhere to international fair trial standards, including the presumption of innocence.”

According to credible sources, at least 304 people, including 12 children, are confirmed to have died, with unconfirmed reports indicating that the total could be more than 400, the experts said. The number of deaths appears to be particularly high in some provinces with large ethnic minority populations, the experts added.

“Reports and footage indicate that Iranian security forces not only fired live ammunition at unarmed protesters, but also aimed at their heads and vital organs,” the experts said.

“Targeting these parts of the body shows that the security forces were aiming to kill or at least cause serious injury. The Governor of Quds City has herself admitted publicly that she ordered security forces to shoot protesters who entered the governor’s building.

Outrageous admission of regime’s governor of Qods city near the capital #Iran, proudly speaking of her order to shoot and kill #IranProtesters #FreeAllProtesters #StopIranBloodshed #IranProtests pic.twitter.com/PrjuniG3U3

“We are extremely disturbed that the Iranian authorities would use such tactics against peaceful protesters exercising their rights to freedom of expression, association and assembly, in breach of international standards on the use of force.”

While noting that the internet shutdown had eased, the experts said they were still concerned about ongoing suppression of the right to freedom of expression.

Iran’s regime has shut down the country’s internet to prevent news of the nationwide uprising in #Iran and the deadly crackdown by the Revolutionary Guards from reaching the outside world#IranProtests #MEK #FreeIran pic.twitter.com/8ab5QbwW31

“Most disturbingly, the families of individuals killed by security forces have allegedly been threatened not to speak out. Iranian journalists have been ordered not to criticise the government response, while the relatives of journalists working for Farsi-language news outlets abroad are being pressured in an effort to silence their reporting.”